Melbourne Renegades are in decent touch this season, finding themselves at the top of the lower half of the points table. With an equal number of wins and losses in 10 matches, Renegades are placed fifth with four monstrous teams above them. Renegades were up against Heat in their last match, but lost to the defending champions by mere 6 runs. Nevertheless, in the lights of Danni Wyatt and Maitlan Brown, Renegades holds a good chance of making it into the final four.

Melbourne Stars are probably going through their worst season ever. With just one win in 10 matches, Stars are placed at bottom of the table. All of their players have failed to deliver on a consistent basis. In their last match, Perth Scorchers hammered them by 9 wickets and chased a decent target of 150 like a child’s play. Lizelle Lee and Erin Osborne tried hard but nothing went in their favour. Stars will now try to give tough competition in their remaining games.

The 44th Match of Women’s Big Bash League between Melbourne Renegades Women and Melbourne Stars Women is scheduled to take place on 23rd November at Eastern Oval, Ballarat. The match will commence from 8:30 AM (IST) onwards with live telecast on Sony Six and live streaming on Fan Code. Scoreboard details will be available on Official Websites.

Danni Wyatt has performed exceedingly well this season with 322 runs to her name at a remarkable average of 40. She played a lightning inning of 40 off just 18 balls against Heat. Wyatt has got the support of her skipper Duffin, who has amassed 286 runs at a healthy average of 47. Both the players are crucial for them.

Molly Strano is the pick of the bowler for Renegades. The 27-year-old has struck 15 wickets at an economy of just 6.5 which makes her one of the best bowlers of the tournament. Strano along with Brown has hunted in players and are one of the main reason behind the team’s success.

Lizelle Lee with 327 runs in 10 matches including a ton has done a decent job thus far. But at the end of the day, she has failed to carry her team over the line. Averaging near 28, Lee has scored 952 runs in 36 innings in her Big Bash career.

Erin Osborne had a good season thus far. The all-rounder has contributed 123 runs and has scalped 8 wickets. Erin has been consistent with the ball till now, but apart from Penna none of the other bowlers seemed to threaten the opposition. 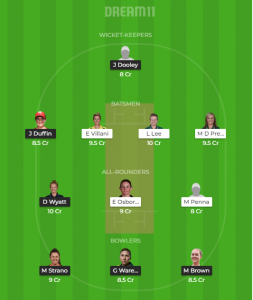