LEI vs ARS Dream11 Prediction: Arsenal will welcome Leicester for the 12th Match Day in Premier League. The two teams will battle in the game to improve their table position. Leicester is currently placed on the 3rd spot with 23 points. Arsenal, after a good start, is hovering near the mid-table at 17 points. Arsenal has presently occupied the 5th spot.

Leicester City
Leicester City FC, under the managerial stint of Brendan Rodgers, has started reminding of the 2016 title-winning side. The team is flying high in the league and has won four games in the past five. Leicester is looking like an outside contender for winning the league. James Maddison is looking like a future superstar, whereas Jamie Vardy has been as prolific as ever. The defense and midfield seem trustworthy. Ben Chilwell provides extra attacking options from the wing-back.

Arsenal
Arsenal started the season very well till their usual problems started hitting them. The team under Unai Emery has begun struggling in defense. Club captain Granit Xhaka has found him under controversy and has made him unavailable for the next game. The young midfielder Guendouzi is suddenly looking for a different player. Arsenal would look to find their form back on their visit to Leicester.

Leicester City will welcome Arsenal at their home stadium, King Power Stadium in Leicester. The match will be played on 9th November 2019. The game will commence at 11:00 PM, according to IST.

LEI vs ARS: Head to Head

Jamie Vardy: The speedy forward is turning into a club legend. The English international is a constant threat on the attack. Leicester number 9 has made 11 appearances. Vardy has scored ten goals in his appearances so far. The player also has provided one assist. Jamie Vardy can prove highly effective against the slow defenders of Arsenal.

James Maddison: The attacking midfielder is a threat at set-pieces. James has quickly made his name around the country for his risk in the set pieces and his incredible passing ability. The 21-year old is a constant threat and can change any game with his accurate passing. James has three goals and two assists under his belt.

Pierre Emrick Aubameyang: The forward is what Arsenal for missing for the past few years. Auba is a constant threat in attack. He is one of those players who create a moment of magic in every game. Auba has scored eight goals in 11 appearances.

Nicolas Pepe: The record signing of Arsenal had a difficult start to his English dream at the beginning of the season. However, the Ivory Coast international has found his feet. The 24-year-old attacking midfielder has shown what he is capable of with the ball in the past few games. Pepe has one goal, and two assists in eight starts. His set-piece deliveries are what make him an even dangerous player for Leicester. 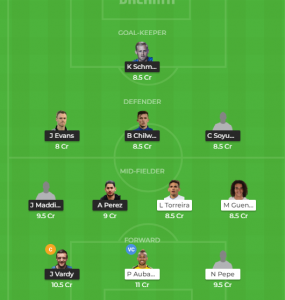