CHE vs CRY Dream11 Prediction: Chelsea have shown that they were correct when they trusted the youth this season. The team had a horrifying start to the season as they lost the first game 4-0 to Manchester United. However, the team has recovered well. The youth in Tammy Abraham, Mason Mount, and others have shown the potential they possess. Chelsea is placed fourth on the table with 23 points in 11 games. The Blues are looking like an outside contender to lift the league.

Crystal Palace, though, has followed a negative projectile to this game. After a fantastic start to the season, the Londoners have failed to win even a single match in the past three matches. The team has managed just one point out of the nine available in the past three games. Crystal Palace is on the 9th spot on the table with 15 points.

The match between Chelsea and Crystal Palace is scheduled on 9th November 2019. The Blues will welcome Crystal Palace on their home ground, Stamford Bridge. The game will commence at 6:00 PM, according to IST.

The broadcast right to English Premier League lies with the Star Network in India. The matches can be viewed on Star Network in HD. Hoststar, the digital platform of Star Network, will stream the game live on the Internet. Live scores will be available on the official website.

CHE vs CRY: Head to Head

Tammy Abraham: The striker has proven his worth in the Premier League. A transfer ban accompanied by the departure of Eden Hazard made many pundits question Chelsea’s attack. However, Abraham has filled the boots of a lead striker to perfection. The English forward has played ten games and scored nine goals. He also has managed two assists.

Christian Pulisic: The American was bought in January and was sent back on loan. This season the 21-year old has big boots of Hazard to fill in Chelsea’s attack. The US international has played the role to perfection. After an initial struggle of few matches, Pulisic has managed to score four goals and two assists in five starts.

Wilfred Zaha: Zaha is undoubtedly the critical player in Palace’s attack. The Englishman is full of skills and pace and has the potential to tease any defense. Zaha has failed to make as many assists and goals as he is potent of this season. However, he can change any game within a flash. Zaha has one assist in 10 games. However, he dribbles past almost five times on average per game and makes two key passes. Zaha will be the key to the Palace if they want to defeat Chelsea.

Jordan Ayew: The Ghana international has been the goal machine of the Palace this season. The 28-year old forward can score goals for fun. He has four goals in 10 games. 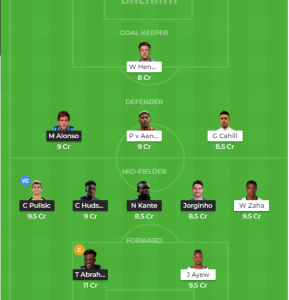