MUN vs BHA Dream11 Prediction: Manchester United will welcome Brighton for the 12th game of their season. Manchester United has struggled in the season and is looking for a mid-table finish. The Red Devils will look to find some form, whereas Brighton would target continuation to their excellent form.

Manchester United is a struggling unit. Injuries to major players such as Pogba, Martial have affected them in a significant way. The team’s midfield and attack are as shallow as even seen in the red side of Manchester.

The midweek win in the Europa League might have revitalized the team. Red Devils are currently on the 14th spot in the table with just 13 points in 11 games. However, the team management will hope that the attacking trio of Rashford, Martial, and James can continue the free-scoring they saw in the Europa League clash. Wan-Bissaka has looked great at right-back and provides solidity in the defense.

Brighton is flying under the new team management. Some good performances partnered with disappointing form from the usual heavyweights have seen Brighton gain a good spot at the table. The team is currently on the 8th spot with 15 points. Brighton would look to capitalize on the bad form of Red Devils for another victory.

The match between Manchester United and Brighton and Hove Albion is scheduled on 10th November 2019. The game will start at 7:30 PM, according to IST. Old Trafford, the home stadium of Manchester United, will host the match.

MUN vs BHA: Head to Head

Marcus Rashford: The homegrown talent has faced some stick from the fans and media alike. However, his goal return suggests that the criticism is unfair at times. The England international has played all 11 games for the team. He has managed five goals and three assists for the team.

Daniel James: The Wales player has been a surprise star for the Red Devils this season.

The departure of big names such as Lukaku and Sanchez gave him a chance to prove himself, and he grabbed the opportunities from both hands. Daniel James is an exciting talent, and his speed has troubled the defenses of almost all the teams. He has three goals and two assists under his name in ten starts.

Neal Maupay: The Brighton forward has used his chances well. He has four goals under his name in nine starts. The player could prove dangerous against a struggling defense of United.

Shane Duffy: The central defender has been rock solid in Brighton’s defense. He also has one goal under his name. He has just appeared in four games due to an injury. He, on average, makes more than three clearances and one interception per game. United will have trouble getting past Duffy. 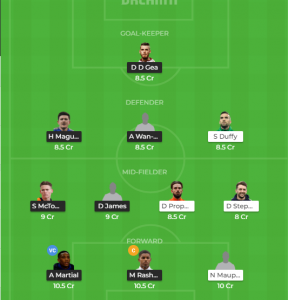