MUN vs BHA Dream11 Prediction: The two teams are in a race to finish on the top of the table. Both the teams are looking perfect in all the departments. The game between them could decide the side towards which the title will tilt.

The Merseyside team is looking invincible at the moment. The team has developed a knack of digging points from games where a defeat or a draw seems inevitable. The attacking trio of Salah, Mane, and Firmino is probably the most dangerous attacking trio in the World. The European champions are on the top spot in the table with ten wins and 31 points. They have a difference of six points on Manchester City. A victory today would put them eight points clear of second-placed Leicester.

The current English champions are working hard on maintaining the pace with the table toppers. However, the team suffered a few setbacks along the way. The team six points behind Liverpool and a defeat against Liverpool could make their title hopes dimmer. However, the attack in Aguero, Sterling ad De Bruyne is a one that can change any game and can give trouble to any team. The team is on 4th spot with 25 points.

The match between Liverpool and Manchester City is scheduled for 10th November 2019. The game will start at 10:00 PM, according to IST. The game will be played at Anfield.

LIV vs MCI: Head to Head

S Mane: The pace of the Liverpool star is enough to make him one of the most dangerous wingers in the World. The player has quickly established himself as one of the top players in the World. Mane has six goals and two assists under his name ten starts.

R Firmino: Firmino is the anchor in Liverpool’s attack. He keeps the attack running, and his passing is one that is feared around the world. Firmino is three goals and three assists under his name in ten games.

R Sterling: The English winger has reinvented himself under the tutelage of Guardiola. The pacey forward from England has seven goals and one assist under his belt.

Kevin De Bruyne: The playmaker from Belgium is making all sorts of records through his assist and defense splitting passes. The player has made nine assists in nine games. He also has two goals under his belt. 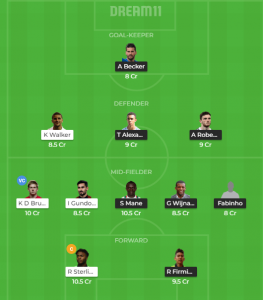