SHF vs MUN Dream11 Prediction: Sheffield and Manchester United will start their campaign after the International break on Sunday. The two teams went into the season on a high. In an unanticipated event, Sheffield will play to protect their spot against the table. In case of a Red devil’s victory, United will overtake Sheffield in the league position.

The team is living a dream on their return to the top flight. Sheffield has stunned a lot of spectators with their grit and resilience. The team is unbeaten in the past five games. Sheffield is on the 8th spot with 17 points. The newly-promoted team has lost just three games. They will miss Dean Henderson due to his unavailability to play against his parent club.

Red Devils have had the worst start to their season in over two decades. However, the team has started to regain its form. The attacking trio of James, Martial, and Rashford has started to click and seemed unplayable in the game against Brighton. United are on the 10th spot with 16 points in 12 games. Injury to Scott Mctominay might prove problematic for the Red Devils.

The match between Sheffield United and Manchester United is scheduled for 24th November 2019 at 10:00 PM, according to IST. The game will be played in the home stadium of Sheffield United, Bramall Lane.

The broadcast right to English Premier League lies with the Star Network in India. Hotstar; the digital platform of Star Network will stream the game live on the Internet. Live scores will be available on the official websites.

SHF vs MUN: Head to Head

Lys Mousset: The French forward is one of the strengths of this Sheffield side. The 23-year-old striker has three goals and three assists under his belt. He could prove a handful for the struggling defense of Manchester United.

M Rashford: Marcus Rashford has come under criticism for his dismal finishing. However, stats tell a different number. Rashford has scored six goals and made three assists for the Red Devils.

Daniel James: The speedy winger gives heart-attack to the fans with his skills and pace. The young winger could easily prove to be the summer signing of the year by the time season ends. The Welsh International has three goals and two assists under his belt. 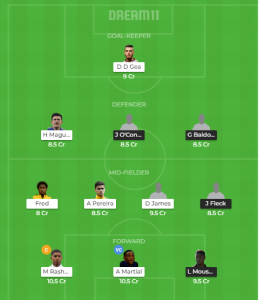