Andre Russell out of World Cup: West Indies all-rounder Andre Russell has been ruled out of the ICC World Cup 2019 due to a knee injury on Monday. West Indies have called in Sunil Ambris to join the squad as Russel’s replacement for the remainder of the tournament.

Andre Russell has been suffering from his knee injury for quite a long time now. The all-rounder wasn’t 100% percent in the matches he played in the World Cup. Russell couldn’t even complete his full quota of overs in the matches against Australia, England, and Bangladesh. He bowled only two overs against England and six overs against Bangladesh. 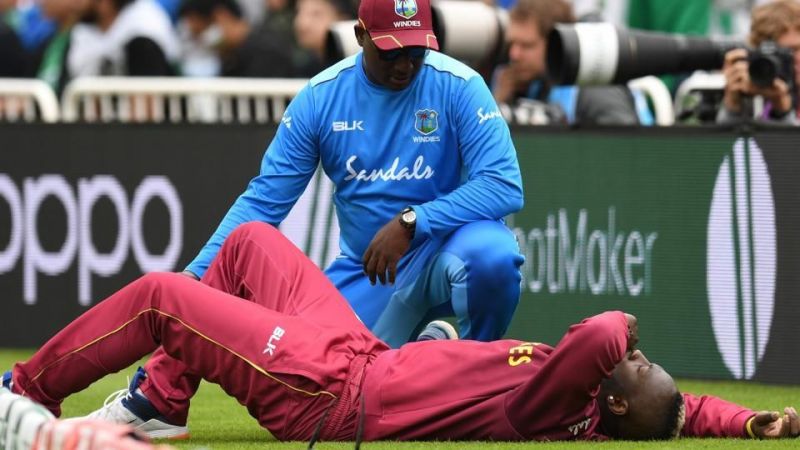 Dwayne Bravo and Keiron Pollard were in the reckoning to replace Russell in the squad, however, given Ewin Lewis hasn’t been in the best of form, management has decided to opt for a possible opener in Sunil Ambris. The 26-year old West Indies cricketer was the second-highest run scorer in the tri-series against Bangladesh and Ireland, scoring 278 runs in four innings at an average of 92.66.

Russell had come in the World Cup on the back of some sensational performances displayed in the Indian Premier League. However, the West Indies all-rounder failed miserably in the World Cup, having scored only 36 runs in three innings.

Andre Russell in his last innings went for a duck. The all-rounder played below-par innings of 15, 21, 0 and against Australia, England, and Bangladesh respectively in the World Cup. 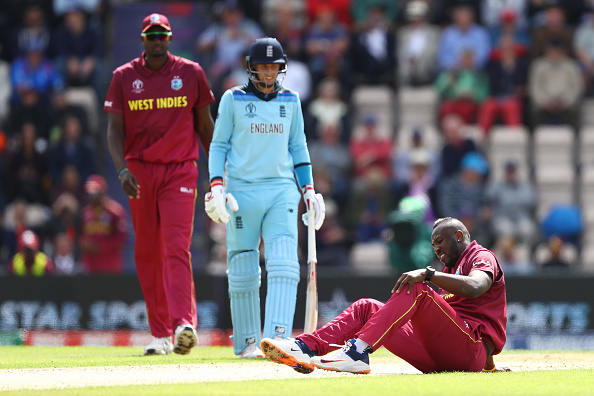 Andre Russell out of World Cup: Carlos Brathwaite replaced him in the match against New Zealand and played a gem of an innings on Sunday. Brathwaite notched his first century in ODI cricket in just 81 balls. The West Indies all-rounder plundered New Zealand bowlers to all part, hitting as many as nine fours and five sixes and had almost taken his team home on Sunday. West Indies, however, lost the match by 5 runs and also their hopes of qualifying for the semis.

Owing to his knee injury, barring the first ODI against Pakistan, Russell couldn’t prove effective with the ball, picking just five wickets in four matches he bowled in the tournament.

Russel’s replacement, Ambris has played six ODIs for West Indies, scoring 316 runs at an average of 105.3.

West Indies have started the tournament on a high with a clinical win against Pakistan. However, thereafter, The Men in Red just fell off the cliff leading to five consecutive losses. West Indies are currently languishing at the eighth position in the points table with only three matches left to be played.

West Indies will play their next match against World Cup favorites, India on Thursday.