The two fallen giants of English football will face each other on the 14th matchday of Premier League season. Both the teams are hovering near the bottom half of the table. The two teams will be looking to win the game and improve their position on the table.

Aston Villa
The promoted team spent a fortune of transfers. However, after the decent start, the results have started to slip drastically. The team has lost three straight games. Aston Villa is currently on 17th spot with 11 points from 12 games. The team would look to break their horrible run against a rejuvenated Newcastle side.

Newcastle United
Newcastle under the managerial ship of Steve Bruce has performed better than most expected. The team, after a dull start, has caught up the pace. Newcastle has 17 points in 12 games and is on the 14th spot. A win against Newcastle will take them to the 8th spot.

AVL vs NEW Match timings & details
The match between Aston Villa and Newcastle United is scheduled for 26th November 2019 at 1:30 PM, according to IST. The match will be played in the home stadium of Aston Villa, Villa Park.

AVL vs NEW: Broadcast details
The broadcast right to English Premier League lies with the Star Network in India. Hotstar; the digital platform of Star Network will stream the game live on the Internet. Live scores will be available on the official websites.

AVL vs NEW: Head to Head

Jack Grealish: Jack Grealish is the undisputed star for the Aston Villa team. The player has the utmost potential and traveled with Villa to and fro to the championship. The young attacking midfielder is going to be crucial for Villa. He has to goals and three assists for the team. The British player also has a passing accuracy of 88%.

Wesley: The Brazilian forward has proved to be the perfect target man for the Villa team. The 22-year old has made 12 appearances to score four goals and one assist.

Jonjo Shelvey: Shelvey is often criticized for his inconsistent performances. However, the premier league veteran has the potential to create magic on the field. He has two goals in seven games. 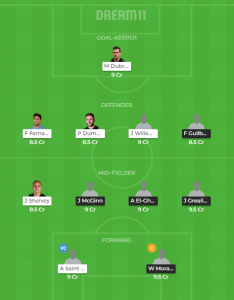