Manchester United will welcome a rejuvenated Tottenham Hotspurs for the 15th matchday of 2019-20 seasons. The two giants of English football had a horrible start of the season. The ‘Special One’ Jose Mourinho took charge of Tottenham, and the club has looked a different side since the managerial shift. The game could be a direct battle between Mourinho’s ego and the United’s youth.

Manchester United have had their worst start to a season in three decades. The administration has maintained its stance that the defeats are a process of rebuilding, and the team is improving. The youth has shown signs of improvements. However, the team would need something drastic to overturn their form. Manchester United is on the 10th spot with 18 points in 14 games.

Tottenham is looking like a changed team since the sacking of Mauricio Pochettino. Main players have found their form since the arrival of Mourinho. The team would look to continue their winning run. Mourinho also has a personal vendetta against the Red Devils. The Tottenham team is at 6th spot with 20 points in 14 games.

Manchester United will welcome Tottenham Hotspurs on the 15th matchday of the season. The match will start at 1:00 AM on 5th December 2019. Old Trafford will face host the game.

The broadcast right to the game between Manchester United and Tottenham Hotspurs lies with the Star Network in India. Hotstar; the digital platform of Star Network will stream the game live on the Internet. Live scores will be available on the official websites.

MUN vs TOT: Head to Head

Marcus Rashford: The English striker has found his feet in the attack of Red Devils. The young striker has been brilliant. He has managed seven goals and four assists for United. He will be an obvious threat to Tottenham.

Daniel James: The Welsh speedster is the man in form. He has managed three goals and three assists in 13 games. He has the potential to break any defense with his speed.

Harry Kane: The English skipper is arguably one of the best strikers in the modern game. He can overturn any game with his sheer brilliance. He can score at will. Kane has scored seven goals and one assist in 13 appearances.

Heung Min Son: The South Korean forward is in a prolific touch. He has scored four goals and six assists in 11 games. 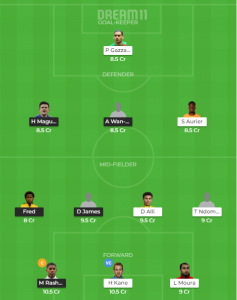