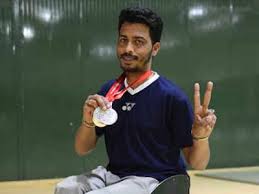 Ace India para shuttler has knocked that will be held next year. Sanjeev, a Para-Badminton player who is conferred with the Maharaja Ranjit Award, is India’s number one Para-Badminton player, he is 10th in Asia and 19th in the world. He has won 11 medals in international competitions, 19 gold medals in national games, 5 silver medals and 3 bronze medals.

Talking about his grief he said that he was ranked fourth in the race to Olympics in the month of April this year. However, his ranking has now slipped to tenth as he missed China, Denmark, and Japan tournaments. The Para shuttler further said that he had a very good opportunity to win gold in Denmark but failed to do so due to lack of funds.

Sanjeev informed that he has written to the Punjab sports department to provide assistance as he is the top contender to qualify for the Olympics. However, to his dismay, the state government replied that they can’t give him money.


Sanjeev had also brought up the issue with the Sports Authority of India last year but says that he has not received any reply from SAI. Criticizing the government the para shuttler who hails from Punjab said that the government for not taking care of the differently-abled sportsperson.

It is to be noted that Sanjeev was also on a strike in front of the house of the Chief Minister of Punjab Capt Amrinder Singh. He demanded a job from the CM and said that if the government can’t help him with the job then they can takeaways his medals and awards. After the strike, Sanjeev was assured that the issue will be raised in the upcoming cabinet meeting and a proposal for one percent quota for the job will also be tabled.