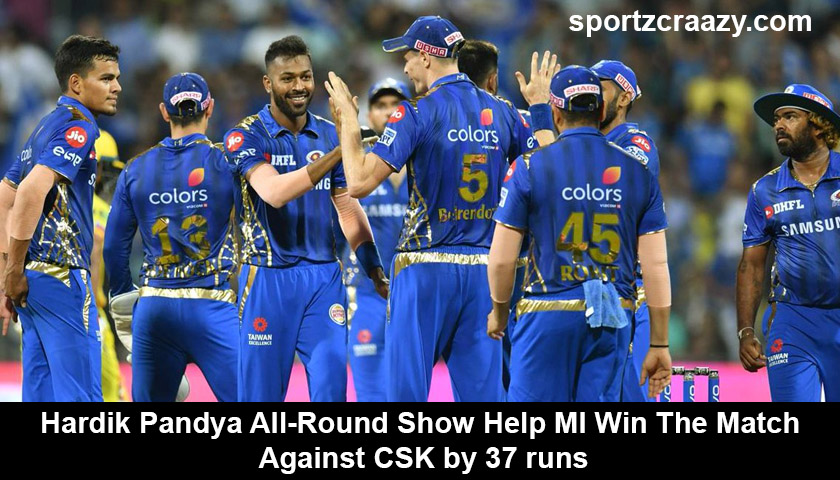 In pursuit of a 170-run target, Chennai started in the worst possible way, losing both their openers in the first two overs. A day when Rohit Sharma’s captaincy was once again on display. Knowing the fact that in order to restrict CSK from chasing the total, Mumbai needed wickets early on. Rohit kept an attacking field, keeping as many as two slips in place. The Mumbai Captain reaped the result as early as in the first over in form of Ambati Rayudu. Both the openers, Watson and Rayudu were sent to the pavilion by Malinga and Behrendorff respectively.

Out of form Suresh Raina once again failed to notch a big inning, getting caught by Pollard on 16. The left-hander has been getting the starts but hasn’t been able to convert them into big scores. Things certainly look bleak ahead if the left-hander continues to play like that.

Kedar Jadhav, on the other hand, played a gem of an innings, who looked to be the only hope who could steer his team home. Dhoni, as expected, took the match as deep as possible. However, it was one of those days, when the ploy didn’t work as planned, as the CSK skipper lost his wicket on 12 off 21 deliveries.

Perhaps, it’s has been one of those downsides in Dhoni’s innings while chasing. If somehow, he gets out in between the chase, pressure mounts on the coming batsman as the required run-rate till that time mount to over 10 an over on most of the occasions.

76 runs were needed in last five and perhaps, it was too much for Jadhav and Bravo against a spectacular bowling line up, having the likes of Lasith Malinga, Jason Behrendorff, and death-over specialist Jasprit Bumrah.

A well-made 56 from Jadhav came to an end in the 18th over, getting caught by De Kock off Lasith Malinga, leaving Dwayne Bravo to do the impossible.

Bravo, too didn’t last too long. In a bid to hit two consecutive sixes, he lost his wicket to Lasith Malinga in the 18th over as CSK eventually lost the match by 37 runs.

Earlier, Hardik Pandya and Keiron Pollard hit 39 runs in the last two overs, as the duo took Mumbai to 170 at the end of 20 overs.

Putting into bat first by CSK, Mumbai were off to a worst possible start, having lost their in-form keeper Quinton de Kock for seven in the third over. However, Suryakumar Yadav continued his good run in the tournament as he took on the responsibility on his shoulders to get the run-rate going. He played the role of an aggressor while Rohit took his time while playing as a second fiddle.

Rohit in his innings of 13 runs off 18 balls looked scratchy from the start. And just when it looked like he would turn the gears, the right-hander edged the ball to the keeper Dhoni off Jadeja in the eighth over. Soon, Yuvraj Singh fell off Tahir, handing a catch straight to mid-off for 4, as MI were reeling at 50-3 in the ninth over.

Mumbai sent Krunal ahead of Pollard and Hardik, and fortunately, the trick went in favor of Mumbai, as he along with Suryakumar Yadav lead MI’s recovery. Suryakumar played a wonderful inning of 59 runs off 43 balls, while Krunal notched up 43 off 32, as the duo bailed their team out of trouble, stitching a 62-run partnership before Mohit Sharma accounted for Krunal’s wicket in the 17th over.

It wasn’t a good day at the office for CSK bowlers. Barring Imran Tahir, who proved out to be the most successful bowler for the side, conceding just 25 runs in four overs with one wicket to his name.

The four seamers, in the form of Deepak Chahar, Shardul Thakur, Dwayne Bravo, and Mohit Sharma accounted for 134 runs in 15 overs as Mumbai Indians collected 82 runs in the last five overs, eventually reaching 170 at the end, thanks to some exceptional power hitting from Hardik and Pollard at the death.