RCB vs RR Match Summary : The 49th match of Indian Premier League between Royal Challengers Bangalore and  Rajasthan Royals ended in no result as both teams shared a point on Tuesday, thanks to the incessant rain at M. Chinnaswamy stadium. 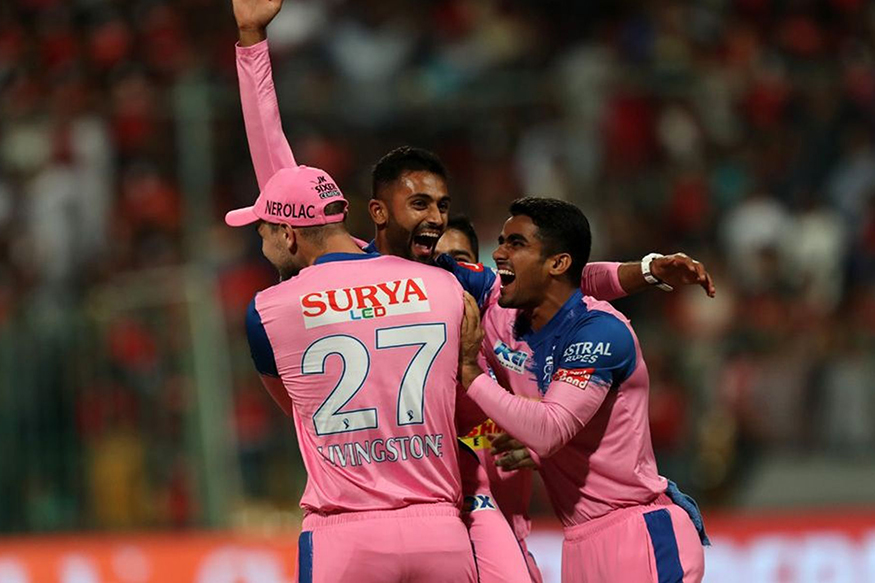 With this, Royal Challengers Bangalore have now become the first team to get officially knocked out of this edition of Indian Premier League.


In a rain curtailed match of five overs per side, RCB notched 63 runs in the first innings, thanks to a 7-ball 25 runs cameo by Virat Kohli.

Virat Kohli and AB De Villiers started the innings with a bang, amassing as many 23 runs to Varun Aaron in the first over. Virat continued his fireworks in the next over of Shreyas Gopal. He hit two boundaries in the first three balls to Shreyas Gopal before the leg spinner make a sensational comeback with a superb hat-trick.

The leg-spinner took the three most important wickets of Virat Kohli, Ab De Villiers, and Marcus Stoinis in three balls to bring his team back into the game.

Gopal took his first hat-trick of his IPL career and second in this edition after Sam Curran in the game between KXIP and DC.

RCB could only add 27 runs in next three overs, as they were restricted to 62 for 7 in five overs in the end.

Rajasthan Royals made a decent start to the run-chase, having hit 10 runs in the first over to Umesh Yadav, followed by 12 runs to Navdeep Saini, and then a 17 run over off the debutant Kulwant Khejrolia. Rajasthan Royals collected 41 runs in the first three overs without losing a single wickets, thanks to some belligerent hitting from the openers, namely Sanju Samson and Liam Livingstone.

Yuzvendra Chahal was brought into the attack in the fourth over and the leg-spinner immediately gave RCB the much-needed breakthrough in the form of Sanju Samson.

However, unfortunately rain once again started in Bangalore which resulted the match to get abandoned and thereby resulting in a no-result on Tuesday.