India pacer Bhuvneshwar Kumar has been ruled out for a maximum of three games in the World Cup owing to a hamstring injury. The Indian pacer suffered the injury during the game against Pakistan on Sunday.

Bhuvneshwar Kumar was seen limping off the field during the game as he slipped on the footmarks and pulled up midway through his third over.


“Bhuvi’s case looks like a niggle, a case of slipping on the footmarks. It doesn’t look too serious at the moment and looks like he could recover in a couple of games from now, maximum of three games,” Kohli said at the presentation ceremony in Manchester. “He is going to be an important factor for us so hopefully he can recover in time. But we have Shami with us and it shouldn’t be much of a worry for us. Even Bhuvi doesn’t think his niggle is too bad and that time would heal it.” he added. 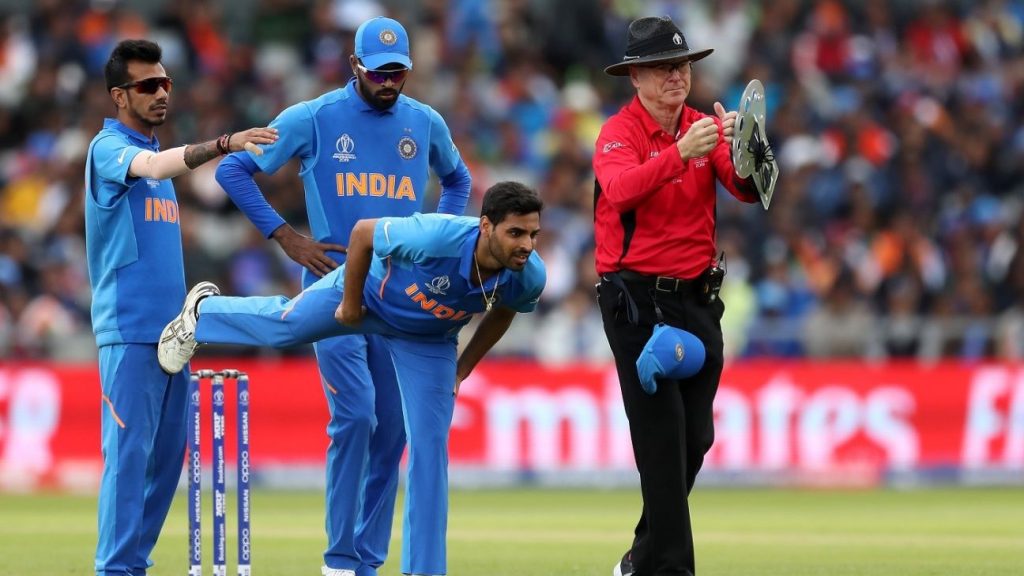 Bhuvneshwar Kumar Out for 2-3 Matches: After picking up the injury the medical team took the decision to keep him off the field for the remainder of the match. Bhuvi’s remaining quota of overs was bowled by Vijay Shankar who got his first wicket of the World Cup only in his first delivery.

Bhuvneshwar Kumar has bowled pretty well in the World Cup matches so far. The right-arm bowler has picked as many as 5 wickets for 94 runs. Mohammed Shami is expected to replace him in the eleven when India will take on Afghanistan in their fifth match of the World Cup.

India is currently sitting in the third position behind Australia and New Zealand. India have now won three wins out of 4 matches they have played in the World Cup so far. They have as many as 7 points right now. New Zealand too have seven points having played as many matches in the perennial tournament.  Australia is currently sitting at the top with 4 wins out of five. They have as many as eight points in their kitty and another two wins will definitely seal their chances of making into the playoffs.

Earlier, India posted a daunting 336 run total on the board against Pakistan on Sunday. Rohit Sharma notched up his second century in the tournament. He played a fantastic knock of 140 runs off 113 balls, while KL Rahul supported him brilliant before he got out on 57 off 78 balls. Virat Kohli too made a vital 77-run contribution with the bat. Pakistan, in reply, could only manage to score 212 in 40 overs as the Men in Blue register their seventh win against Pakistan in the World Cup.