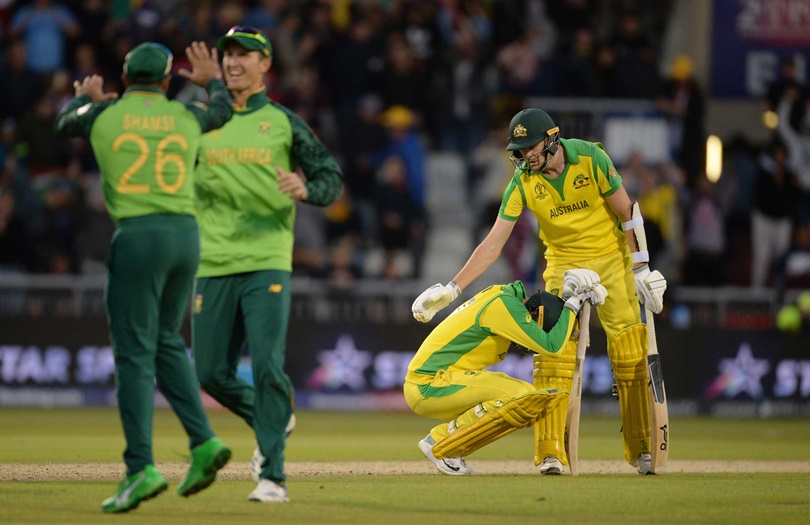 Australia found themselves in a comfortable position as they became the first team to qualify for the semi-finals. They were sitting pretty on top and despite an Indian charge, had the last hurdle in from of South Africa, who weren’t in great form. Australia just needed a win to stay on top and face New Zealand in the semi-finals, but life doesn’t go as expected, does it?

South Africa won the toss and elected to bat first. Toss has had a huge role in the World Cup as teams have found it hard to chase totals in excess of 250. South Arica had a rare positive start as Quinton de Kock and Aiden Markram got off to a flier to peg Australia on the back foot. It was then the Faf Du Plessis magic that took over and helped by the classy Van der Dussen, he guided South Africa to a total in excess of 300.

With 326 to get to stay top, Australia had to get off to a good start. South Africa knew how good Finch and Warner have been against pace and hence, introduced spin. Who better than Imran Tahir to get an early breakthrough. He repeated his feat from the England game where he got rid of a dangerous Jonny Bairstow and got rid of an in-form Aaron Finch.

Soon, things went from bad to worse as Usman Khawaja had to come off owing to a calf injury. Smith’s poor run continued and he got out for 7, putting Australia in deep trouble.  It was then down to the magic of Warner to single-handedly get the Aussies through somehow.

A valiant effort well supported by the Aussie keeper Alex Carey went in vain as Australia fell short by 10 runs and finished second on the table after India beat Sri Lanka in their final game of the round robin stage.

All Went Wrong for Australia: From the prospect of facing the Kiwis, whose campaign has gone downhill, to now facing England, who look to have got the momentum; the prospect of losing Khawaja and Marcus Stoinis, and Shaun Marsh also reportedly out injured; it all went wrong for Australia on one given day and the going would get only tougher from here, a pungent of a World Cup; possibility of things falling apart just one single day, and your dreams are shattered.

It would be interesting to see how Australia cope up and they would require their former skipper Steve Smith more than ever now and the Aussie batsman would need to rise up to the occasion and show what he is made up of. He would require support from the like of Finch and Warner, with the quartet being the spine of the Australian batting.

The Australian bowling too would need Starc to be at his best and Pat Cummins banging them in, for them to have a good chance against the hosts.