Aleister Black Biography: The World Wrestling Entertainment has been popularly known as the most deserving platform for the professional wrestlers. It’s been more than 40 years, WWE, without a doubt, not only made our childhood awesome but providing the best out of them until today. In less than a decade, we witnessed several wrestlers made their own grounds in the WWE after influencing the WWE Universe with their performances in WWE NXT. WWE Superstars like Seth Rollins, Dean Ambrose, Roman Reign, Samoa Joe, Finn Balor, and many others made their presence felt inside the squared- circle.

WWE is currently witnessing a fresh talent from NXT, signed to WWE for the SmackDown brand, popularly known for his finishing move ‘Black Mass’. Tom Budgen, better known by his in-ring name Aleister Black, is a Dutch professional wrestler, holds a background of martial-arts in martial arts in kickboxing and Maan Karate from ages 9 to 15. Having an excellent talent of martial arts, Black still trains kickboxing to this day.

Aleister Black made his first appearance on professional wrestling in 2017, leading his ways to join WWE Smackdown in 2018. Black defeated Andrade Cien Almas to win the NXT Championship. Black received an opportunity to battle for Raw Tag Team Championship with Ricochet at Fastlane and the SmackDown Tag Team Championship at WrestleMania 35.

Aleister Black Early Life
Tom Budgen as Aleister Black, was born on May 19, 1985, in Amsterdam, Netherlands. Before joining WWE, Black worked for over a decade in the independent circuit under the nickname Tommy End. Aleister Black took the training in various forms of martial arts like Pencak Silat and kickboxing in his childhood.

Aleister Black Personal Life
Aleister Black married fellow professional wrestler Zelina Vega in 2018. Black was born to a very heavy, almost cult-like, religion. He credits his occult personas to be influenced a lot by his father’s personality. Black is known by several nicknames that include The End, The Anti-Her, The Dutch Destroyer, Hellion and The Ominous Man from Amsterdam. 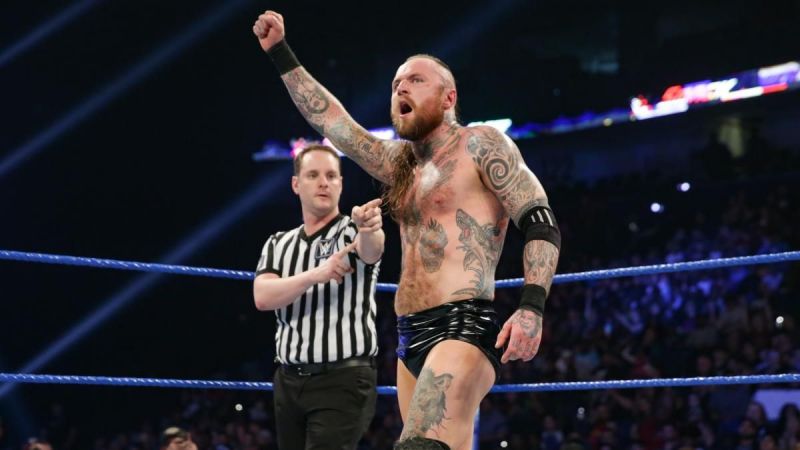 During the time with the name Tommy End, he bagged numerous championships that include: wXw Unified World Heavyweight Championship,

Budgen got a golden opportunity to be the part of the greatest professional wrestling platform in sports entertainment, i.e., WWE. In 2016, he joined WWE NXT with a new in-ring name Aleister Black. He emerged victorious in his first match against Lince Dorado. Budgen started making his presence in NXT with his martial art moves to his opponents.  Black defeated Adam Cole to qualify for a number one contender’s fatal four-way match for the NXT Championship, which also involved Johnny Gargano, Killian Dain, and Lars Sullivan.

However, he lost the title to Tommaso Ciampa during NXT TV tapings for the July 25e after Johnny Gargano interfered and accidentally hit Black with the title belt.

Black also bagged three awards at the NXT Year-End Awards 2017 hat includes Male competitor of the year, Breakout Star of the year and Rivalry of the year (vs Velveteen Dream).

Black and Ricochet received an opportunity to headline Wrestlemania 35 in the early phase of their career. They went to battle for a fatal four-way tag team match for the WWE SmackDown Tag Team Championship against The Usos, Rusev and Shinsuke Nakamura, and The Bar.