Virat Kohli is arguably the world greatest batsmen in modern times, and remains in paparazzi headlines for his happily married status with Bollywood actress Anushka Sharma.

The power couple fell in love during an Ad shoot for a TV commercial and married on December 2017 in Italy. Anushka supporting Virat in the stadium and Virat blowing kisses to his wife after reaching a milestone is a common sight.

Often we see Virat Kohli look-alike in the stadium, grabbing all the attention, but one of them that went viral has left the fans amused. Some were convinced of him being the Indian skipper, but that wasn’t the case. 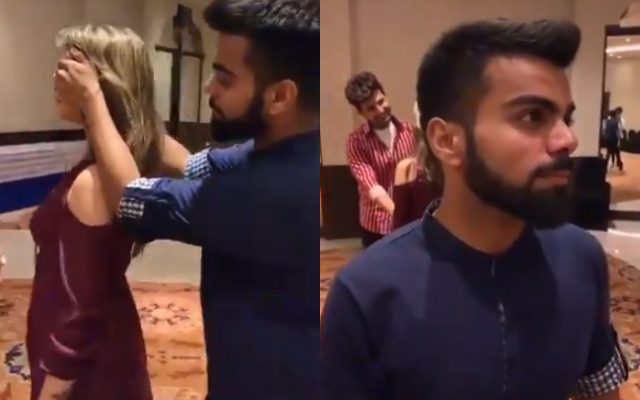 A latest Tiktok video showed Kohli look-alike trying to impress a girl, but she denied his proposal. After several failed attempts “lookalike Kohli” came to know the person the girl likes and arranged for their meeting.

Further the video showed Kohli look-alike hiding the girl’s eyes, and surprising her by presenting her love in front of her. In the end, Kohli look-alike left the scene, leaving the couple happy and letting them enjoy their moment.

It is unsure, but Kohli double has been identified as Gaurav Arora.

Here are some Twitter reactions to the Virat Kohli video: