Telugu Titans played the first match of Pro Kabaddi Season 7 against U Mumba, losing the game by 31-25. Being 17-9 down in the first half, Telugu tried to claw their way back but ended as the losing side on the first day of Pro Kabaddi League Season 7.

Rahul Chaudhary’s Super 10 and Manjeet Chillar’s ‘High 5’ then pegged back Telugu Titans further,  leading to a second straight loss for the Hyderabad based side. Perhaps, Titans have plenty of issues to resolve ahead of the third game against Dabang Delhi.

Titan’s biggest bid Sidharth Desai spending most of the time outside the mat is a big concern for the team, and we might see a couple of changes when both Dabang Delhi and Telugu Titans will square against each other on Wednesday.

One of the most underperforming teams in the Pro Kabaddi League, Dabang Delhi are yet to create an impact in the league. Having not qualified in the last five seasons, Dabang Delhi made heads turn in the Season 6 as they qualified for the playoffs for the first time in the history of the league. They would be keen to showcase a strong performance in Pro Kabaddi Season 7.

The match between Telugu Titans and Dabang Delhi will be played at Gachibowli Indoor Stadium, Hyderabad on 24th July 2019.

The match will start at 8:30 PM IST on 23rd July 2019. The match will be telecasted on Star Sports Network. Live score updates and the Live Stream would be available on Hotstar.

Siddharth Desai – One of the best raiders in Vivo Pro Kabaddi League, Siddharth Desai has struggled to accumulate raid points in the two matches he has played in Season 7 so far. However, given his talent and will to improve, he would be keen to make a strong comeback and show his mettle in the game against Dabang Delhi K.C.
Vishal Bhardwaj – Vishal Bhardwaj has made 12 tackles in 2 games, accumulating as many as four tackle points. Vishal too hasn’t played to his potential yet and would look to learn from his previous mistakes and hope for better performance in the next game against Dabang Delhi.

Ravinder Pahal  –The second most successful defender in Pro Kabaddi League, Ravinder Pahal will be the one player to watch out for, the in the game between Dabang Delhi and Telugu Titans. The Dabang Delhi defender has 263 points in 89 matches in the league so far.
Meraj Sheykh – Iranian player Meraj Sheykh has been making waves in Pro Kabaddi League since Season 2. Miraj so far has made 796 raids, accumulating 309 raid points and 53 tackle points. 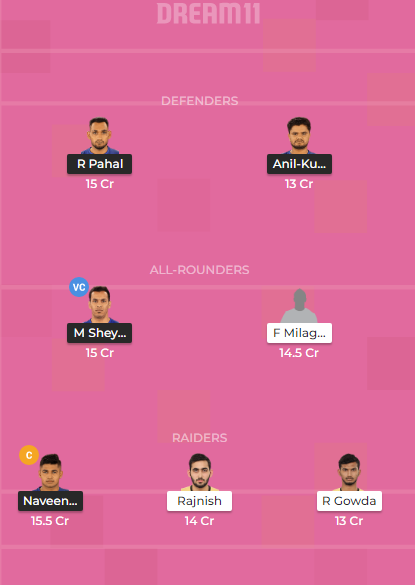