If there is one cricketer who has taken his game to another level from India it will be none other than Mohammad Siraj who was an instrumental figure in the recent Australia tour which India won by 2-1.  He seems more confident as a bowler now and stated that India has the potential to beat England in their backyard in the same way we defeated Australia. 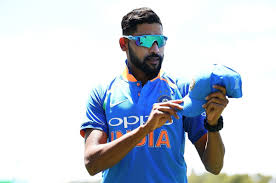 One of such remarkable talents has been Indian pacer Mohammad Siraj, who pocketed 13 wickets in just three Tests, finishing as India’s highest wicket-taker in his debut Test series Down Under.


The right-arm speedster who is known for his swing balling skills has overcome the adversity of passing away of his father and grown up as a cricketer and will be eager to perform in the matches to come.

“The Australia series taught me a lot. Playing under Ajju bhaiya (Ajinkya Rahane) was amazing. He backed me a lot. I still get goosebumps when I recall that day. Holding the winning trophy and celebrating with the team is a different feeling altogether. I am confident that we will beat England the way we defeated Australia. I am not nervous, I am confident. We have stars in our team,” Siraj told TimesofIndia.com in an exclusive interview

“I am confident India will beat England under Virat bhaiya’s captaincy. I am eager to hold the winning trophy with Virat bhaiya in England. Our team is looking so strong and we are ready for this big series,” the 27-year-old further said.

Shiraj said that he will be eager to bowl to Joe Root who is a world-class batsman but the former has troubled him in the past and will be looking forward to troubling him again in the upcoming contest.

“Joe Root is England’s best batsman. I am targeting his wicket and there are others too who I want to target. I dismissed Root during the home series and he is part of my plan of action. My aim is to take as many wickets for my team as possible,” Siraj signed off.

India will start five-match Test series starting from August 4th, 2021 against England which will also mark the resumption of the second cycle of the World Test Championship.