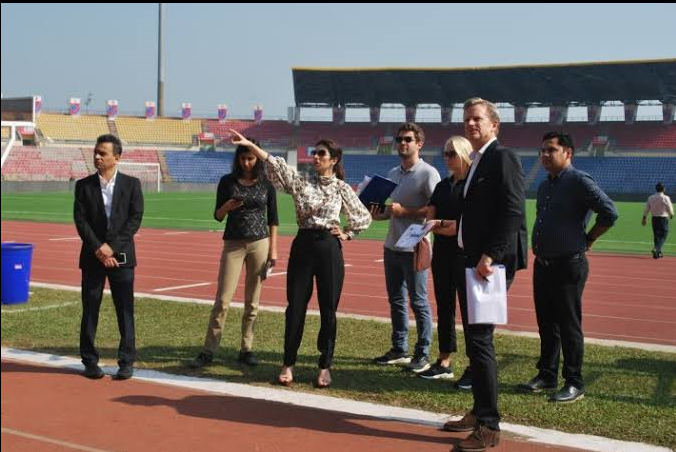 The FIFA and delegation along with the Local Organising Committee (LOC) members after successfully inspecting the Vivekananda Yuba Bharati Krirangan Stadium (VYBK) in Kolkata, visited the Indira Gandhi Athletic International Stadium in Guwahati to examine preparations for the FIFA U-17 Women’s World Cup India 2020.

To the delight of the Indian officials, the delegation after having a comprehensive look at the stadium in the beautiful city of Assam seemed more than satisfied. After the inspection of FIFA’s Project Lead for U-17 Women’s World Cup 2020, Oliver Vogt said that he was aware of the passion this part of India has for football. He said that he was happy to be back in the city after 2017 and was confident that if the venue is picked as a venue for the U-17 Women’s World Cup then it can repeat the success of 2017. Roma Khanna, the Tournament Director of the LOC, echoed the same sentiments as she said that the city had set a benchmark in 2017 event. But at the same time she added that this time around the support from all stakeholders has to be even better as infrastructure from 2017 is in place, but some modifications need to come in.

Avinash Joshi – IAS, Principal Secretary, Sports & Youth Welfare Department, Govt. of Assam said: “The Chief Minister and the government of Assam are very keen for this tournament to happen in Guwahati, and are fully geared to give whatever support is needed.”

Earlier, the FIFA committee and LOC delegation had successfully completed an official inspection at the Vivekananda Yuba Bharati Krirangan Stadium (VYBK) in Kolkata. The officials had claimed that they were happy to see the infrastructure from 2017 to still be in place in Kolkata, but they added that with time new technologies need to kick in as the sports has to keep pace with new technological advancements.

The officials from FIFA and LOC will next travel to Bhubaneswar on Friday to inspect the facilities in the capital of Odisha.