BLR vs PUN Dream11 Prediction: Match 99 of the Vivo Pro Kabaddi will be played between the home team Puneri Paltan and Bengaluru Bulls in the last day of the Pune leg of the tournament today. The last clash of both the teams took place in Chennai leg where Puneri Paltan had an upper hand as they beat Bengaluru Bulls as the final score card read 31:23

Bengaluru Bulls: The side has won four out of their last six matches as their run for cementing their permanent place in the play offs continues. The Most valuable Player Pawan Kumar Sehrawat has been tremendously doing well. However, the side lost their last game against Bengal Warriors where the match was very close and could have ended on any side’s favor. Pawan Sehrawat top scored for his side yet another time with 19 Points in the match. He got a good support from the all rounder Sumit who scored 7 Points against Bengal side. The skipper of the side Rohit Kumar who is going through a patchy phase of his form has not been able to score consistently for the side. However, defenders look in a great touch and support their star raider Pawan Sehrawat by reviving him early during the match.

Puneri Paltan: After victory in the opening fixture of their home leg, Puneri Paltan have endured a torrid run since, losing to Patna Pirates by 22 points before blowing a seven-point lead in under two minutes against Tamil Thalaivas to settle for a tie. They find themselves 11 points adrift the playoffs spots with five matches left in the campaign and hence need to beat Bengaluru Bulls to bolster their chances of finishing inside the top six. The last match they played against Tamil Thalaivas that ended in a draw. Manjeet scored 11 Points as he became the top scorer for his team. Pankaj Mohite too played well as he scored 8 Points against Tamil Thalaivas. Overall the side played well but failed to pull off a win. As they beat the Bengaluru Bulls in their last encounter this season, they would want to continue their dominance in today’s match too.

BLR vs PUN Broadcast Details:
The Kabaddi match between Bengaluru Bulls and Puneri Paltan will be telecasted across the Star Sports Network in multiple languages. BLR vs PUN Live Score updates and live stream will be available on Hotstar.

BLR vs PUN Best Players:
Bengaluru Bulls:
Pawan Sehrawat – One of the most dangerous and consistent players of this season, Pawan holds the top position in the most number of points in this season i.e., 216 points in 16 games. He has scored 13 Super 10s this season and his contribution in the defense too can’t go unnoticed as he has scored
Rohit Kumar – The skipper of the side has been having a good run of his form this season. He provides the best support to his raider Pawan during the game. Rohit has seen his form returning back as he had a couple of good games in his previous matches. So far, Rohit has 78 points in 16 matches and he is one of the key players of his side.

Puneri Paltan:
Pankaj Mohite – The raider has been one of the most consistent players of his side as he has already scored 82 points in 14 matches. If given a go in the playing seven he can make a difference in his team’s victory.

Manjeet – The lanky raider has been a consistent performer for the side as he has scored 118 points in 17 games and has won several games for his team so far. He is very close to reaching 100 points milestone this season as he is short of just 1 point. He will be a key player for his side ahead of the game against Bengaluru Bulls. 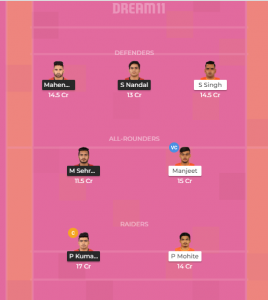