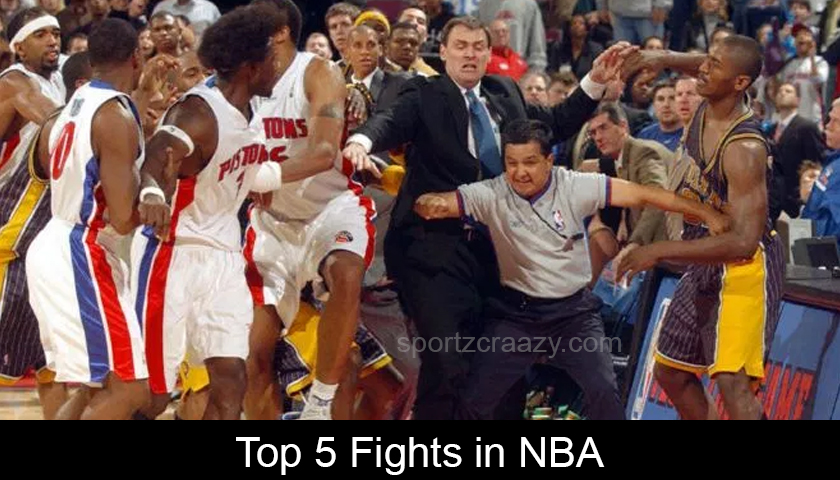 Biggest Fights in NBA: Everyone who plays and follows Basketball is aware of the fact that basketball is a contact game and even though certain efforts have been put on by the respective governing authorities, it sometimes results into a brawl between the players. Same goes with the NBA championship and even though most of the disputes get resolved in the knack of the time, there are few instances when these “irrelevant “arguments” take the shape of a fierce physical battle.

Eventually, these instances have led to the suspensions and numerous fines to the fellow players but still it further brings upon all the unwanted drama and entertainment to the basketball fans in the process. With that said, let’s have a look at the top 5 fights in NBA history.

Biggest Fights in NBA: There wasn’t much available in the context of this fight in the 1966 game until; the video was recently been made available by the ESPN channel. It all started when Willis bumped into Rudy LaRusso and felt miffed by the latter’s action on him. He then went on to crash with every single laker’s player on his way down to the other half and even though he fell to the ground in the process, he continued with his “inappropriate “behavior with the players from the other team.

The incident was been quoted as a myth a few years back as there was no video footage available at any source by now. It was when ESPN released this video that the fans did get to know about the dirty reality of the clash between Willis and laker’s players in the process. It was further been disclosed that both Reed and Larusso were been slapped with a $50 fines after the feud and been warned about their behavior in the context of the spirit of the game.

Biggest Fights in NBA: If one has to look at the most infamous physical brawls in NBA history, then this was sure that one match. The whole dispute started when Ron Artest went on to foul on Ben Wallace besides the rim. In return, Wallace showed his frustration and both the teams went on to form a big brawl inside the arena. Interestingly, Artest came out of the brawl and struck a pose near to the announcer’s table whilst his teammates were indulged in a physical battle.

That was the time when one of the piston’s fan threw a cup towards Artest and this once again ignited the fire which was about to fade away. Artest ran away toward the fan and Jackson joined him in the same feud instead of taking the dispute out of the sorts. It was after almost an hour that the dispute seems like settling down and whilst this was not enough, there were still few of the fans which were going around with all the hooting against Artest and Jackson for all the punches they received from the former. It was all a crazy show going around and no one knew what they actually have to do in the process.

Biggest Fights in NBA: It was all down to a match between the Los Angeles Lakers and the New York Knicks where two of the best players of the game got involved in a physical tussle inside the court. Lakers’ legend Bryant was rightly going for the point when he unintentionally sneaked his elbow to the Knicks’ guard Chris child’s and this is where it all got started. The players started it off with a face off against each other and only after the child’s punched Bryant twice, he got one in return from the legend as well in the process. It became so dirty that their team members have to pull them off from the game and they both were ejected out of the match as a result.

Speaking about the same incident a few years later, Childs did say that he could’ve really hurt Bryant but he still didn’t do that. He further quoted that it was all intentional from Bryant and he could’ve made it dirtier before deciding not to.

Biggest Fights in NBA: Larry Johnson and Alonzo mourning were quite famous for their verbal altercations within the NBA arena and it was the time when they both met each other in the eastern conference quarterfinals, they took the battle to a whole different level.

There were just a few seconds left in the fourth quarter when Johnson went aggressive over a rebound and bumped into his counterpart in the process. Being miffed at the same situation, Mourning went on to take a jibe at him and got involved in a physically intensified clash between both the players. Jeff Van Gundy did come forward to separate both the players but even he finally found himself hanging at Mourning’s leg out of the whole process which made a seriously comical situation for the fans around. Eventually, both the players were been fined for a sum of $32500 in total for their unethical behavior on the basketball court.

Biggest Fights in NBA: You seriously got to think twice before getting into a brawl with the “biggest man “in NBA history. Such was the persona of Shaquille O’Neal but it was during a game between Lakers and bulls in the year 2002, where he narrowly escaped a jail term for his illicit acts on the court. It all started when Shaq went on to receive several intentional fouls from Charles Oakley and Brad Miller and got furious in the process.

It got so dirty that Shaq did try to land a punch on Miller’s face which missed by quite a few inches. It was the same punch which could have landed him into jail if would’ve landed on the spot. Still both the teams found themselves involved into the feud and it all sounded like a Hollywood action drama at the basketball arena. Although Miller did escape the “Big punch’, he has to give up his jersey whilst dragging himself out of the herd in the process.