Tamil Thalaivas vs Dabang Delhi match review: Dabang Delhi earned their second win in as many days under controversial circumstances with a one-point win against Tamil Thalaivas at the Gachibowli Indoor Stadium, Hyderabad today. The scores were level with Dabang Delhi’s Naveen Kumar going for what was a do-or-die raid. Though he got not earn a touchpoint, Manjeet Chhillar of the defending team stepped out of court and then attempted a tackle to hand Dabang Delhi the points and the win.

Dabang Delhi had the same heroin Naveen Kumar, who yet again put in a stellar show to help claim victory for his side. Joginder Narwal was good in defence. Rahul Chaudhari starred for the Tamil Thalaivas, while Manjeet was their stalwart in defence. 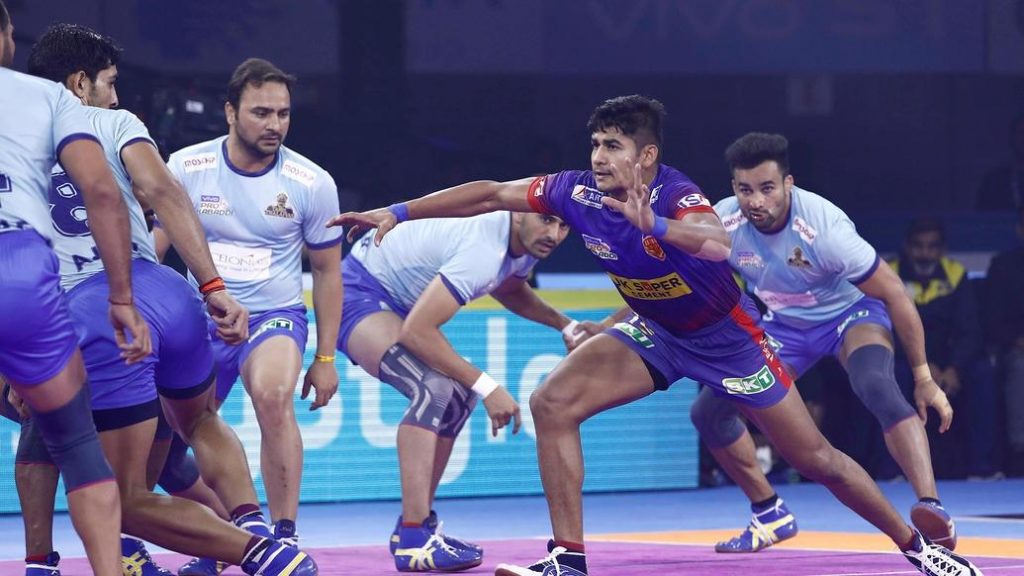 Tamil Thalaivas got the first points of the evening after raiders from either side returned empty-handed. Meraj Sheykh then went for the do-or-die raid and though he got the bonus, he failed to get a touch and went off the mat.

Tamil Thalaivas then built on the momentum as Rahul Chaudhari sent Ravinder Pahal off the mat, backed by great tackles from Ajeet and Manjeet Chhilar to put Tamil Thalaivas 5-1 up in the game.

Delhi then pulled off a couple of super tackles, powered by captain Joginder Narwal to restore parity as the score read 5-5. But Tamil Thalaivas pulled the strings and courtesy of some brilliant play from Ajay Thakur, inflicted the first all-out of the evening as Dabang Delhi was sent packing with the score reading 13-6.

Manjeet Chhillar then pulled off a tackle to get another point for the Chennai side, however, Ravinder Pahal and Vishal Mane’s poor run of form continued as they offered Rahul Chaudhari two raid points. Naveen Kumar then crawled Delhi’s way back with a couple of points. The score was now reading 10-16.

The last couple of minutes did see some exciting moments, despite the scoreboard not moving much. Some good work by Ajay Thakur forced Narwal into the lobby, before earning a touchpoint in the next raid, sending Chandran Ranjit off. Naveen Kumar then got one back for Delhi in the do-or-die raid as Ran Singh failed in the tackle. The score at half-time read 18-11.

Delhi had the more positive start to the second half as they quickly cut-down the lead from 7 to 5, courtesy of Meraj Sheykh’s tackle on V Ajith. Rahul Chaudhari kept getting the points for Tamil Thalaivas. The score stood at 20-15 and it was game on.

But Tamil Thalaivas were quick to pounce on Delhi’s mistakes as Ajith Kumar sent Ravinder Pahal packing, while Naveen Kumar stepped out of bounds to hand the Chennai side, a Super Tackle and 2 points, to take the score to 23-17.

Four empty raids followed and it was the time for a do-or-die raid from Tamil Thalaivas, who sent Ajith Kumar to do the job, only to get caught by the Delhi captain Joginder Narwal. Meraj Sheykh then got a point on Delhi’s do-or-die raid situation to pull back a point. It was 24-19 with less than 10 minutes to go.

Delhi coach affected a change as he brought on Saeid Ghaffari for Ravinder Pahal, who struggled yesterday and today. But the tide was in the favour of Tamil Thalaivas as Manjeet effected a super-tackle to send Naveen Kumar off the mat, while Ajeet sent Meraj Sheykh off to extend the lead to 27-19.

Saeid Ghaffari quickly came into action as he tackled Rahul Chaudhari on a do-or-die raid to cut the gap by 7. Manjeet then completed his second High 5 in as many matches, with a tackle on Neeraj Narwal. But moments later, Chandran Ranjit sent Manjeet off the mat with a successful raid and the score now read 28-21 with a little over three minutes to go.

Just when it seemed all over for Delhi, Naveen Kumar pulled off a Super Raid, getting all three, Ajeet, Vineet Sharma, and Ran Singh out. Ajay Thakur then failed in the do-or-die raid and Tamil Thalaivas were all out. The score now read 29-28 in favour of Thalaivas with less than a minute to go.

Naveen Kumar then pulled off a sensational tackle to level the scores at 29-29. A couple of empty raids followed with Tamil Thalaivas playing smart, inviting Delhi on the do-or-die raid the final action of the match. With less than 6 players on the mat, bonus points weren’t available and Naveen had to go for touch. He tried the tricks up his sleeve, but failed and was tackled, however, Manjeet had gone off the court and the referee awarded a point apiece. Tamil Thalaivas took a review where the TV umpire found that Manjeet Chhillar had also participated in the tackle, which was then tagged null and void, awarding Delhi the point. 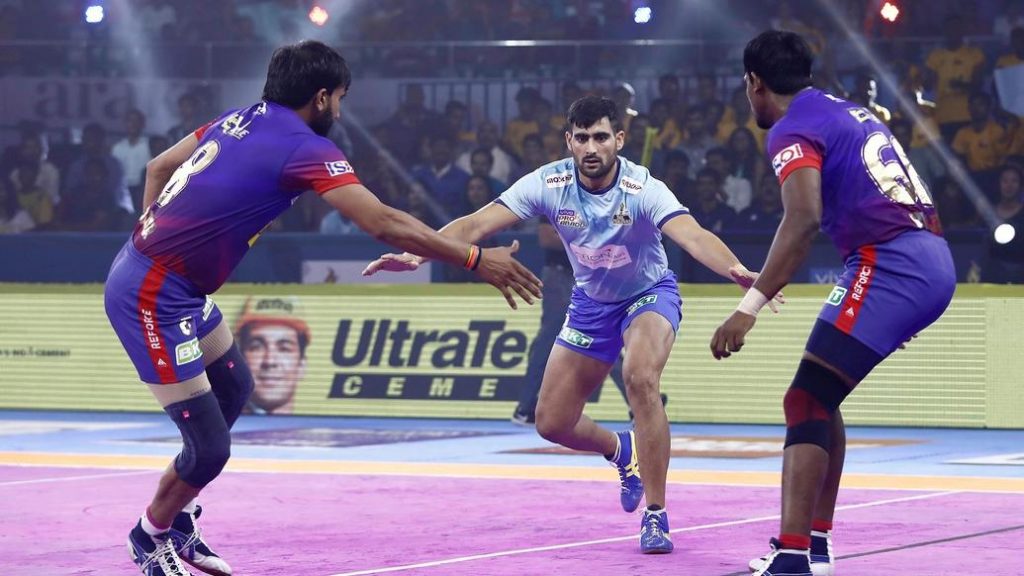 Dabang Delhi won another edge of a seat thriller to go top of the table.