HYD vs DEL Dream11 Prediction: Match 94 of the Vivo Pro Kabaddi League will see Telugu Titans face Dabang Delhi K.C in the Pune leg of the tournament today. The last time when both the sides went loggerhead was at Gachibowli Stadium in Hyderabad. Dabang Delhi K.C outclassed the home team in a very close game that ended with the final scoreline of 33:34.

Telugu Titans:  The side will be playing their first match of the Pune leg today as they will face the current table toppers Dabang Delhi K.C tonight. They lost the last game against U Mumba as they were completely outclassed by their raiders Arjun Deshwal and Rohit Baliyan. The top scorer from the side was Rakesh Gowda as he scored 7 points and also contributed in the tackle. Siddharth Desai, Farhad Milaghardan and Vishal Bhardwaj scored 4 points each. Despite their efforts, it was not sufficient to win the match. The team has not been able to utilize Siddharth Desai’s potential as he has not been able to make a similar impact this year like season 6 of the Pro Kabaddi League. Defender Vishal Bhardwaj who had not been able to perform in last few games scored 4 points in the last game and he is one of the three defenders to reach 50 tackle points milestone this season along with Sandeep Dhull and Fazel Atrachali. Having lost their home leg game against the Dabang Delhi earlier this season, Telugu Titans would want to win this game tonight.

Dabang Delhi K.C: The table-toppers have just lost 2 matches in this season and have consistently remained on the top position in the points table. They played their last game against Gujarat Fortunegiants and beat them 34-30. The side has a formidable record of just 1 loss in their last eleven matches. The star player of the match was Naveen Kumar (12 Points) who scored his 14th Super 10 of this season by playing 15 matches. Raider Vijay scored 5 Points as he contributed in the side’s win. Naveen is on a run of 13 consecutive Super 10s, which is most by any raider in the history of Pro Kabaddi League.

HYD vs DEL Broadcast Details: The Kabaddi match between Telugu Titans and Dabang Delhi will be telecasted across the Star Sports Network in multiple languages. Live Score updates and live stream will be available on Hotstar.

Telugu Titans
Siddharth Desai – The top raider of his team, Siddharth is a strong and sound player who has by far scored 116 points in 14 matches and has 3 Super 10s this season. Siddharth can be used in a better way because the moment he spends more time on the mat, he makes life tough for the opponents.
Vishal Bhardwaj – Vishal is the stalwart of the defensive unit of the team. He has scored 53 points in 14 matches and has 5 High 5s this season so far. He is one of the key players of the side.

Dabang Delhi K.C
Naveen – The mainstay of the Dabang Delhi team, Naveen has scored 13 Consecutive Super 10s in this season. He has an average of over 12 raids in a match. Naveen has been an outstanding performer of the side. He has scored 187 points in 15 matches this season and is close to 200 points mark this season.
Chandran Ranjit – He has been the side’s second-highest scorer after Naveen, scoring 73 points including 4 tackle points in 13 games thus far. He has played a crucial role in turning games around on several occasions. His presence makes a significant impact on the side. 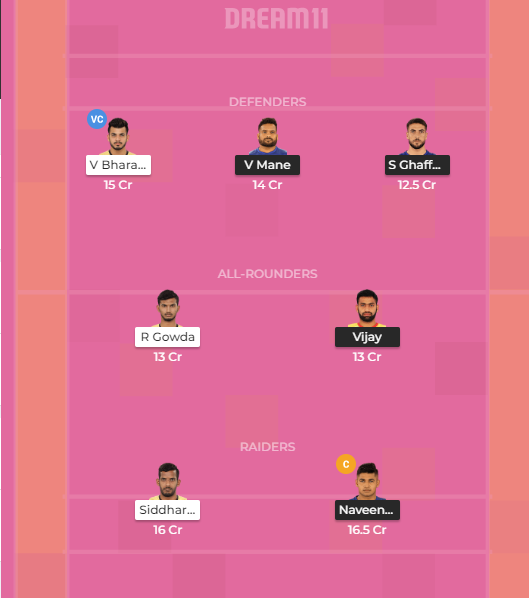 Catch all the live updates of HYD vs DEL Kabaddi Match, including live scores and match report. This time HYD vs DEL Dream11 Prediction will depend on the final team line-ups.