Indian Cricket Team led by stand-in skipper Ajinkya Rahane has created a history which will be remembered for years to come. Many Cricket experts/pundits have already named this nail-biting series as “One of the best that they have witnessed so far “. It becomes even more special for visitors as they were bog down with one after the other with a serious injury but they never gave up and challenged the fully-fledged Aussie team on their backyard and registered a series win by 2-1. 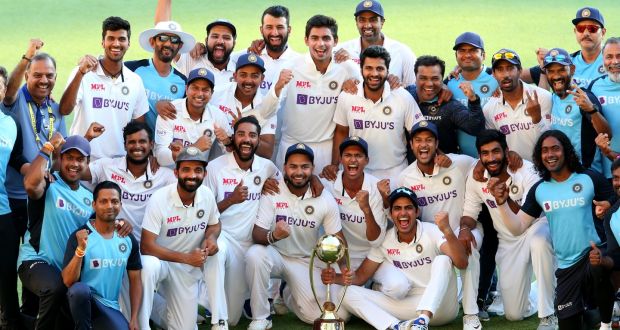 The credit of this victory certainly needs to be given to brilliant Captaincy by Ajinky Rahane followed by unstoppable performance by young guns like Mohammad Shiraj, Rishabh Pant, Shubhman Gill, Washington Sundar and Shardul Thakur to make sure that India cross the line against mighty Aussie in their own soil.


However for this brave performance support staff needs to be given equal attention as they gave confidence to players after facing humiliating defeat at Adelaide where they were bowled out on 36 runs and coach Shastri  described on post match conference when he was asked what did he said  actually to players on the last day of Brisbane Test.

To which he replied that I told players that they need to play with their heart and soul for the country without thinking about the result.

“I just said. Today is the last day of the tour. When we cross the boundary lines, this India badge… don’t forget it. You are playing for India, put your life on the line [jaan laga do]. It’s the last day, give it everything. After that, whatever happens, happens.”

“Look, the coach’s work is to mentally prepare the boys. Their mindset and thought process should be clear. No point in overcomplicating things. If you keep your game simple and give attention to the basics… Coach sits in the dressing room, the boys go out and fight. The cricket they’ve played, there is no need to make any statement. Cricket will talk.” Ravi Shastri said as quoted by Cricbuzz.

However many fans and celebrities stated on their official Twitter handle that the way India made comeback after losing the first Test match and winning the series on Australian soil by making a movie on it.