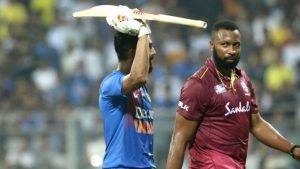 Kohli had quite a battle against West Indies pacer Kesrick Williams in the T20I series and he also imitated his ‘notebook tick’ celebration after a match-winning knock. He was also seen furious during the first ODI after the controversial run-out of Ravindra Jadeja.

“You have to ask him why he is so animated. I can’t answer that for you. It is what it is. You ask him that question and let him answer that. I don’t know. I have no clue,” Pollard replied with a smile.

West Indies were down and out in the second ODI after they put India to bat first. Pollard believes they were knocked out of the game after they conceded 120 runs in the last 10 overs.

“We were in a good position and if you lose wickets frequently, you put yourself on the backfoot. That’s where we faltered in the chase and we accept that. Chasing 388, guys had to express themselves rather than trying to get in. I thought where the game changed was in last 10 overs. We went for 127 runs, that’s where we lost the momentum in the entire game.”

“Before that it was neck and neck, and we knew it was a good track. We haven’t really executed in the back-end, which has been really the storyline for us when there has been a flat track,” Pollard added.

The fielding was not also up to the mark as Shimron Hetmyer dropped Rohit Sharma on 70. The dynamic opening batsman then went on to make 159 runs, which costed the visitors heavily. However, the West Indies skipper defending his side’s fielding and believes the overall standard was good.

“For me, personally fielding is an attitude. The intensity with which you go out on the field, your anticipation, and awareness of what is taking place at the point in time. Both teams have been guilty of dropping catches and making some basic errors,” he concluded.