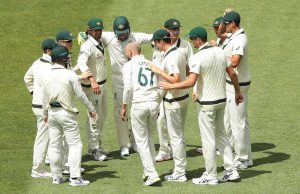 Current Australia skipper Tim Paine believes that the Australian Test team has been gelling well together in the last few months and have a bunch of passionate and talented players, who are ensuring the team rises back to the pinnacle of the sport once again.

Speaking after the Kangaroos thrashed New Zealand by a mammoth margin of 296 runs to continue their golden form after they reclaimed the Ashes in August this year, Paine believed that the side has improved drastically after the retirement of the legends and the sandpaper saga that had threatened to ruin the image of the sport in the country.


Following the ball-tampering incident in Newlands last year, Cameron Bancroft, Steve Smith, and David Warner were banned for a period of time, after which Paine was appointed as the skipper. Their win against the Kiwis was their third successive win by a big margin, having defeated Pakistan by an innings in two Tests last month.

“We are getting there, but we can get better,” he said.

“We are still improving, but certainly over the last 18 months, there has been a drastic improvement in this cricket team.

“We’ve got some players back, which are helping, but we have also seen some real improvement in the guys who got a chance 18 months ago, and the experienced guys have come back and put a bit of icing on top.

“We are moving in the right direction and happy with the way we’ve played in the last three or four Tests.”

Paine also spoke about the over-reliance on Smith and stated that it is pleasing how the other cricketers have raised their hands when the former captain failed to perform. Smith had scored over 700 runs in the Ashes but has not scored a single fifty in his last three Tests.

“We touched on at the end of the Ashes,” he said.

“We needed other guys to stand up and can’t be reliant on Steve.

“Obviously Marnus (Labuschagne) has been unbelievably good, and Davey (Warner) and Joe Burns have been scoring runs.

“If we want to be one of the better teams in the world guys have got to stand up and we can’t be reliant on too few.

“We are really happy with how our batting has developed,” he added.