Team of the World Cup 2019 -
Skip to content
Cricket 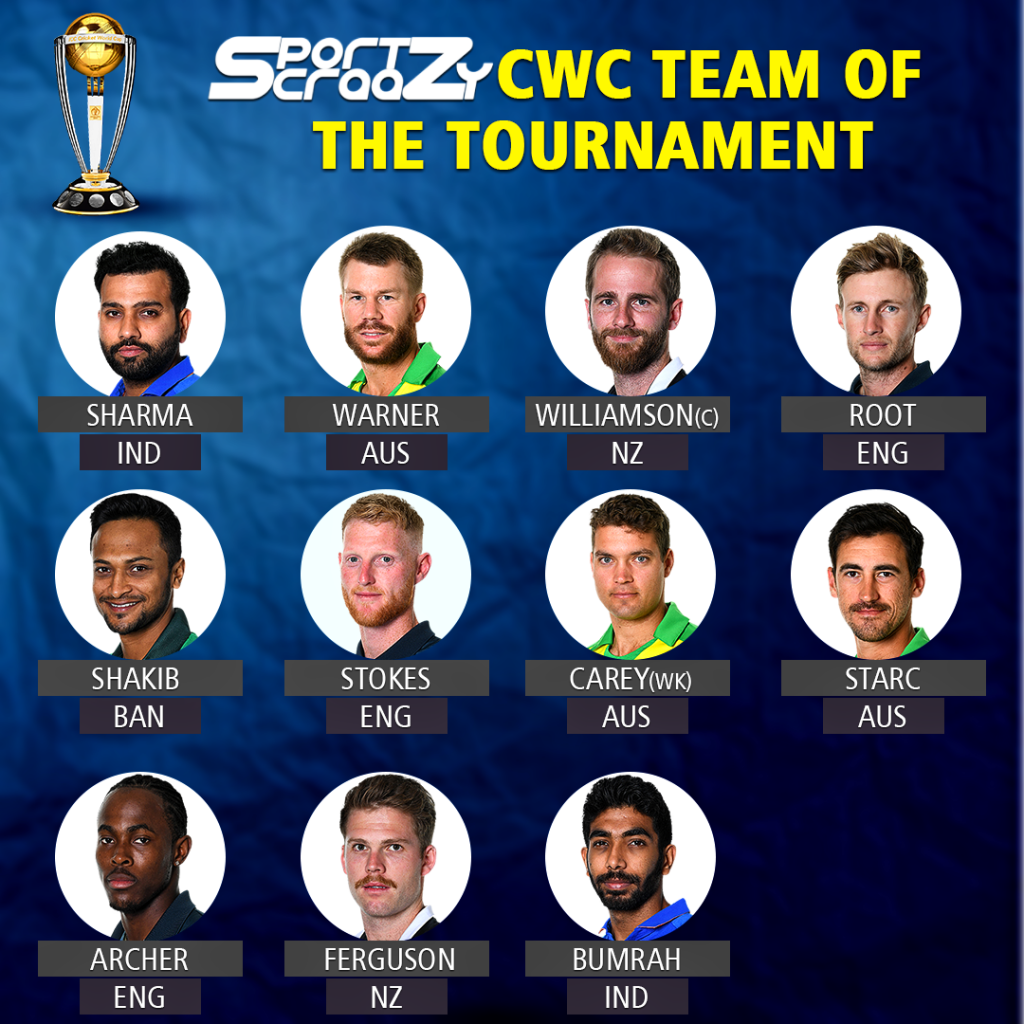 The world cup has finally come to the end. England emerged as the champions of the tournament, earning their maiden World Cup Title. While the England players were brilliant and contributed in the victories, the tournament also witnessed some exceptional performances from players of the other nations as well.

These players performed with utmost consistency for their respective teams right throughout the World Cup. These included the likes of star Indian opener Rohit Sharma, Australia’s tormentor-in-chief David Warner, probably the best player of the tournament, all-rounder Shakib-Al Hasan from Bangladesh, who performed exceptionally well for their teams in the just concluded tournament.

We at SportzCraazy have come up with our World Cup 2019 XI, keeping in mind the best performers and the balance of the side.

Indian star opener Rohit Sharma, who was the leading run-scorer (648 runs) in the tournament has been picked as the opener of the side. Besides, David Warner (647 runs) who was behind Rohit Sharma by just 1 run has been named the second opener.

Kane Williamson has been named the captain of the side and will form the backbone of the team. The New Zealand captain scored 578 runs at an average of 96.33 and also leading his team to the finals.

Joe Root will come in at number 4 and will steady the ship for the side when needed.

Shakib-al Hasan who had been a prolific performer in the tournament with both bat and ball will play at no. 5, followed by Ben Stokes whose heroics in the final of the world cup will always be remembered. Both can roll their arms as well.

Alex Carey will take care of the Wicket-keeping duties of the team as he effected 20 dismissals from behind the stumps. He also adds to the depth of the batting, having bailed out Australia on multiple occasions. He was one of the pleasant surprises of the tournament

Lockie Ferguson was in phenomenal form as he ripped apart batting units on his own. Despite Trent Boult in the side, Ferguson proved to be the biggest threat for the opposition. He finished with 21 wickets, second most in the league.

Jofra Archer took 20 wickets in the tournament has been included in the playing XI. He was one of the most effective bowlers of the tournament and played a major role in England’s triumph.

Indian Pacer spearhead Jasprit Bumrah has also been included in the squad because of his wicket taking abilities in the middle of the innings, miserly spells and death bowling. He finished with 18 wickets in the tournament.

What would be your Playing XI?