SOM vs GLO Dream11 Prediction:- Somerset will lock horns against Gloucestershire in a south group encounter of vitality T20 blast on Friday. Gloucestershire are coming into the match with on their back and thus are sitting at fourth position with four wins in ten matches. On the other hand, Somerset would also be full of confidence, having won their last two out of their two games. They are placed one position below Gloucestershire at fifth but have played only nine games so far.

SOM vs GLO: Pitch Report
The south group match between Somerset and Gloucestershire will be played at The Cooper Associates County Ground at Taunton. As many as five T20 games have been played at this ground so far, where teams which have batted first has won four times, while the chasing team has only managed to win the match on one occasion. Whosoever team win the toss is likely to bat first.

SOM vs GLO Match Details
The South group match between Gloucestershire and Somerset will be played at The Cooper Associates County Ground at Taunton on August 16, 2019 Friday. The match will start at 11:00 PM.

SOM vs GLO Broadcasting Details
The south group match between Somerset and Gloucestershire will be telecasted at Sky Sports in England and the Fan Code App.

SOM vs GLO HEAD TO HEAD IN LAST FIVE MATCHES

Babar Azam has been the star player for Somerset this season. The Pakistan batsman raises the bar every time he comes in the middle to bat. Babar scored an unbeaten 102 run knock off just 55 deliveries in the game against Hampshire. He missed out in the last game against Kent, getting out for just 9 runs and thus would look to make a comeback and hope for a big innings against Gloucestershire.

Azam’s compatriot Tom Banton has also been in superb form. He went hammer and tongs in the last game against Kent, scoring 100 runs off just 52 deliveries, including nine fours and five sixes. He would look to keep the momentum going ahead of the match against Gloucestershire.

Somerset’s batting order is pretty well balanced this season, with

Babar and Tom Banton at the top and skipper Tom Abell providing solidity in the middle. Abell will have the responsibility to score runs in the middle overs as he will also be one of the most important players for your fantasy team.

Skipper Michael Kingler made a useful contribution in Gloucestershire’s seven-wicket win against Hampshire. He scored a valiant 40 off 38 deliveries. He will be one of the important picks for Gloucestershire on Friday.

James Bracey came ahead of Cockbain and played a phenomenal 64-run innings off just48 deliveries, helping his team win the match by seven wickets. Undoubtedly, he will be the player to watch out for on Friday.

An integral cog of Gloucestershire team, Ian Cockbain has been amongst the runs in the tournament. He boasts of scores of 40, 61, and 40. 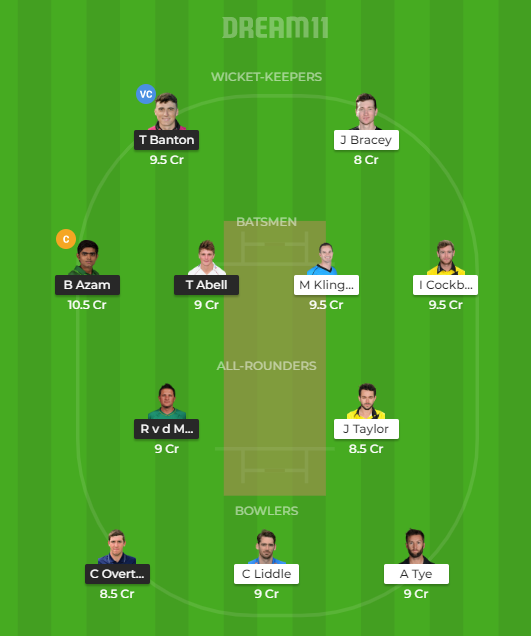 Catch all the live updates of SOM vs GLO cricket match, including live scores and match report. This time SOM vs GLO Dream11 Prediction will depend on the final team line-ups.