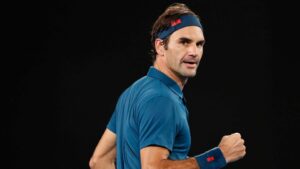 Tennis great Roger Federer, on Monday, said he is missing Wimbledon but hopes to play the tournament in 2021. The 38-year-old who has undergone two knee surgeries this year and had already announced that he will not play until next year.

“Personally, it has been very pleasant to stay in the same place for a long time, I hadn’t experienced that for more than 25 years,” Federer said at the launch of the “Roger Center Court” running shoes created by Swiss brand On.

“Clearly, one of my big goals, and that’s why I do recovery work every day and work so hard, and why I’m preparing for a 20-week physical preparation block this year, is because I hope to play at Wimbledon next year.”

Federer said that this lockdown will give him ample time to recover from his surgery and he will have to be patient as he waits to return on the court.

“It’s very easy to say but it’s a long way to come back, you have to be patient, it also was a time for reflection.

“We were in the mountains, isolated, we didn’t see anyone, I didn’t see my parents for almost three months, we were very serious and strict.”

The ATP And WTA will resume in August despite some professional players have been tested positive for COVID-19.

The US Open will be the first slam that will resume in August, getting underway behind the closed doors in New York on August 31st, before the French Open starts, with fans allowed to attend Roland Garros, on September 24.

The Swiss star will be also hoping for Olympic gold for the first time in his career as the Olympics has been postponed to next year in 2021 with a final to be played a week before his 40th Birthday.