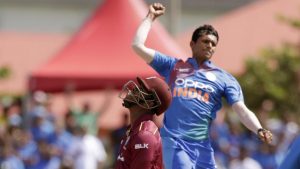 India fast bowler Deepak Chahar has been ruled out of the third ODI between India and the West Indies. For the series decider to be played at the Barabati Stadium in Cuttack on Sunday, Navdeep Saini has been named as Chahar’s replacement.

“The All-India Senior Selection Committee has named Navdeep Saini as a replacement for the injured Deepak Chahar for the third match of the ongoing Paytm ODI series against West Indies,” the BCCI said in a release on Thursday.

“Deepak felt mild pain in his lower back following the second ODI played in Vizag on Wednesday. The BCCI medical team examined him and has suggested that the fast bowler needs some rest in order to fully recover. He has thus been ruled out of the final ODI,” the release read further.

Chahar played the first two matches of the series and has conceded 92 runs after bowling 17 overs without taking a single wicket. Meanwhile, If Saini is included in the playing XI in the final match, then it would be his ODI debut.

Despite winning the game, Virat admitted that India fielded poorly in both the first two ODIs. “Wasn’t really pleased with how we took the review. Catching has been disappointing. We need to field better, we can’t afford to drop catches as we have. It is important to maintain standards. We are one of the best fielding sides in the world,” the Indian captain said.