Mansher was born on born 1 December 1965 in Calcutta, West Bengal. After his birth, his family shifted to Delhi. He completed his schooling from St. Columbia’s School, Ashok Place in New Delhi. Then he joined St. Stephen’s College to complete his graduation from Delhi University. 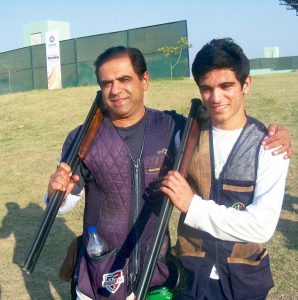 Mansher Singh has a small family consisting of his wife and his son Jaisal Singh. Mansher is very close to Jaisal who is following the footsteps of his father to make a career in the shooting.

He made his Summer Olympics debut in the year 1984 at the Los Angeles Olympics. He was just 18 years old when he represented India at the Olympic Games. In the 1994 Commonwealth Games in Victoria, British Columbia, he won a gold medal in trap event which made him one of the favourite contenders to represent India at the next Summer Olympics.

After 12 years, he again qualified for the Atlanta Olympics in 1996 but unfortunately, he couldn’t win any medal.

He again represented India at the 2004 Athens Olympics and then 2008 Beijing Olympics which was also his last appearance in Olympics. He he came eighth in the Men’s trap event at the 2008 Bejing Olympics.

As of now, Mansher holds multiple responsibilities mainly being the mentor of the rising shooters of the country. He handles his own training and also coaches Kynan Chenai, the third member of the trap squad for Incheon. He also deals with Beretta shooting equipment.

After the Rio Olympics, the former Shooter became the coach for shotgun events. With the 2020 Tokyo Olympics taking into consideration, he is currently coaching the young shooters to make their prepare for the biggest stage.

He is an Arjuna Award winner for his 32-year long-spanning career in Shooting.

His net worth is not revealed.