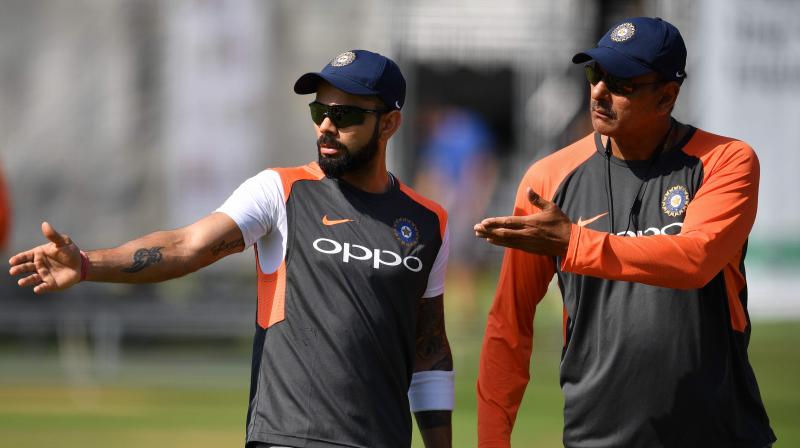 Indian skipper Virat Kohli has hit back at head coach Ravi Shastri’s critics, adding that the unnecessary trolling of the former cricketer is “agenda-driven”. The 57-year old has often been in the news and a target of soft memes for his flamboyant nature and lifestyle. According to Kohli, Shastri has proven himself as a cricketer and a coach, and the trolls directed towards him are unfair.

“I think most of these things are agenda-driven and I don’t know whose, why, what for, but to accept lies in that manner, it couldn’t be anything but agenda-driven,” Virat Kohli told India Today.

The India skipper added: “In Ravi Bhai’s case, luckily, he is a person that doesn’t care at all.”

Shastri had started off his career as a slow left-arm spinner but improved as a batsman and soon started opening the innings for India. He was given the Champion of the Champions award in the World Series that was held in 1985. He averaged almost 41 as a a top-order player, which was touched upon by Kohli.

“(Promoted from) number 10 to opener and got an average of 41 as an opener, he is not going to be bothered about someone sitting at home and trolling him, because if you want to troll a guy who has done that, then get up, face those bowlers, do what he has done, have the clarity to do it, have the courage to do it, then have a debate with that guy.”

“He is absolutely chilled out, he says our only focus is how we can be the best team of all time. I think these petty things on the outside, they don’t matter at all to him,” he added.

Shastri was reinstated as the head coach of the Men in Blue this August after a successful first term, in which the Indian side won their maiden Test series in Australia. Under the duo of Shastri and Kohli, the Indian side has managed to reach the peak and remain the top side in both Test and ODI cricket. Their next big challenge will be the T20 World Cup in Australia next year.