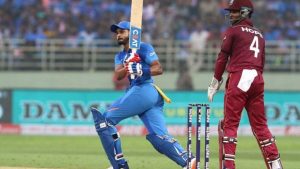 Virat Kohli lost his wicket for a golden duck in the second ODI at Vizag but didn’t fail to entertain his fans with a reaction on Shreyas Iyer’s premature celebration for a half-century during on Wednesday. On the second ball of the 48th over, the Mumbai batsman hit Keemo Paul for a single run and raised his bat to celebrate while he was still on 49. He was corrected immediately by Captain Virat Kohli from the pavilion. Kohli was seen giggling over the whole incident while asking Iyer to stop the premature celebration.

The video went viral on social media. Meanwhile, coming back to the game, India rode on centuries by Rohit Sharma and KL Rahul to post a huge total of 387/5 after being put in to bat first. Rohit top-scored with 159 runs off 138 balls, which including 17 fours and five sixes. He stitched a 227-run opening partnership with Rahul, who scored a 102-run knock laced by eight boundaries and three sixes. Iyer then contributed with a 53-run knock, which was laced by three boundaries and four sixes. Then followed Rishabh Pant who impressed with 39 runs off 16 balls, including three boundaries and four sixes.

Then came the biggest moment for India in the game when spinner Kuldeep Yadav claimed a hat-trick as India wrapped up the West Indies for 280. India had lost the series opener by eight wickets in Chennai and thus, the third and final ODI in Cuttack on Sunday will be a series decider.

Although India won the game, their fielding was poor both in the first as well as second ODI and Kohli was quick to admit that despite the comfortable win in Vizag.

“We need to field better, we can’t afford to drop catches as we have. Fielding is about wanting the ball, as long as we enjoy ourselves, we’ll be right up there on the field as well,” said Kohli.