Jayanta Talukdar Biography: Jayanta Talukdar is an Indian Recurve Archer who represents India at the International Archery events. He is best known for winning Gold medals at the Asian and South Asian Games. In 2007 he was awarded the Arjuna Award for his achievements in Archery.

Jayanta was born on born 2nd March 1986 in the city of Guwahati, Assam. He hails from a mining family as his family Ranjan Talukdar is a quarry owner. He has an elder brother Nikhilesh Talukdar. Jayanta was spotted during a talent hunt by Tata Archery Academy coaches and was asked to come for a trial to Jamshedpur in 2000. The 14 years old Jayanta, who never lifted the bow in his entire life was shortlisted among the 50 boys and girls in the camp. 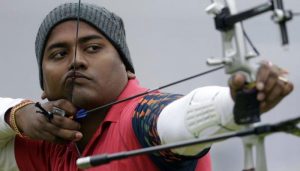 Jayanta started practising archery in the year 2000 when he was spotted by archery selectors in a talent hunt trial held in Guwahati. He was not even aware that Archery could be taken up as a profession. But subsequently, his destiny pulled him towards the sport. Fourteen years old Jayanta shocked everyone when he got selected in the Indian Junior National Team. The Indian team finished the tournament with a Silver medal at the 2004 Junior World Championships.

In 2005, Jayanta made it into the Senior National Team as he outscored some big names to become the Senior National Champion in 2005. In the very next year, he won a gold medal at the South Asian Games.  The promising young archer became the first Indian Archer to win a gold medal at the FITA Meteksan Archery World Cup in 2006. He went on to win a Bronze medal in the 2006 Doha Games. In 2006, he defeated compatriot and team member Tarundeep Rai to bag the gold medal in the SAF games.

The year 2006 was one of the most successful years of his career as he earned nig recognition following his medal-winning performances across the world. Jayanta Talukdar consolidated his place in the national team by winning the gold in the Senior Nationals at Kochi and clinching the Olympic round. In the next year in 2007, the Indian government felicitated him with Arjuna Award for his remarkable achievements in archery. Despite some dipping failures, he got regular sponsorship from Tata Steel in his career. On 21st June 2012, Jayanta Talukdar booked his berth for the London Olympics along with the men’s team. He competed in both individual and men’s team events but failed to make an impact as he lost to Jacob Wukie in the first round of the individual event, and the men’s team lost to Japan in the first round of the event. His latest big medal has been winning the Bronze medal in the 2015 Asian Archery Championships with Deepika Kumari in the Recurve Mixed Team event. As of now, he is working in Tata Steel Corporation in Guwahati.

NET WORTH:
Jayanta works with Tata steel corporation and receives a monthly salary. He also wins cash prizes at the archery events. However, his net worth and overall source of income is not revealed.