BAR vs SLPG Match Timings & Details: The match is scheduled to start at 12:30 AM IST, on 24th October 2019. The match will be played at Sinobo Stadium, home of Slavia Prague.

BAR vs SLPG Broadcast Details: The match will be broadcasted on Sony Network and can also be viewed on the Sony LIV app.

BAR vs SLPG Head to Head: The teams haven’t met each other before.

Luis Suarez – The Uruguayan striker has been the leader of the attack in the absence of Messi and now that his partner is back, Suarez will be more threatening for the opposition. He has scored 2 goals so far this season.
Antoine Griezmann – The French attacking midfielder is one of the best players currently around the world and offers variety in the attack through his skills. He has scored 3 goals and made 2 assists so far in the domestic season.

Peter Olayinka – The Nigerian forward has been the lone goal scorer for the team in the league. He will be a key player for the team and will more expectations will be on him.
Tomas Soucek – The defensive midfielder is also the captain of the side. His ability to move the ball forward will be crucial during the situation of Counter Attack. 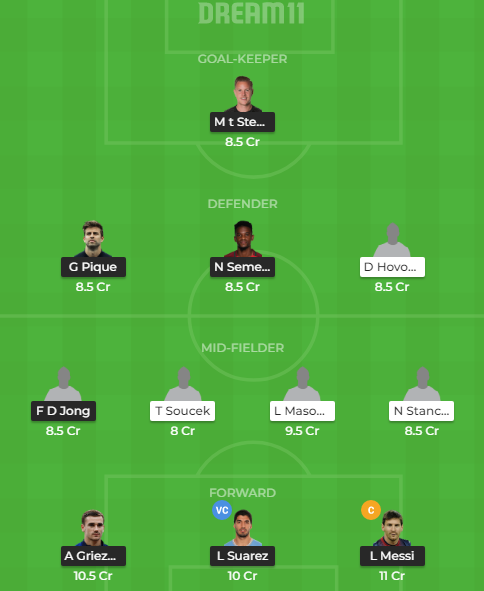