BAR vs MOS Dream11 Prediction: The round 11 phase of the regular season match of the Turkish Airlines Euro league will be played between FC Barcelona vs CSKA Moscow in the home area of the FC Barcelona, Spain when both the teams hit the road for an eleventh-round match-up on Saturday. These teams will face each other for the 34th time – CSKA leads the all-time series 19-14.

Barcelona leads the euro league standings and is undefeated at home and it is also set to host the Russian giants CSKA. Nikola Mirotic (18.5 ppg.) has been Barcelona’s best scorer until now, followed by Cory Higgins (14.1 ppg.) and Kyle Kuric (10.1 ppg.). In fact in their last match against Maccabi Tel Aviv, Nikola Mirotic top-scored with 25 points (14 rebounds and 3 assists), Cory Higgins accompanied him with 15 points (4 rebounds and 3 assists). Barcelona has turned into one of the best-scoring teams in the EuroLeague this season (84.4 ppg.) and leads the competition in rebounds (37.6 rpg.). Dominating the defensive boards (26.2 drpg.) has allowed Barcelona to play fluently on offense, shooting the ball with good percentages (53.1% 2FG, 39.7% 3FG). As usual, running its offense through Nikola Mirotic, Cory Higgins and Brandon Davies will be critical.

CSKA lost its last three road games and sees this showdown as the perfect opportunity to bounce back as they fly to Spain for their match tip-up against the table-toppers FC Barcelona. Mike James (19.1 ppg., 4.5 apg.), Darrun Hilliard (11.7 ppg.) and Janis Strelnieks (8.7 ppg.) have led CSKA so far this season. Mike James is a hard-to-guard playmaker due to his unique combination of athleticism, shooting range, court sense and ability to improvise when the shot clock is running down. He will have a tough competition from the opposition in the form of Malcolm Delaney. In the opening eight games of the season, CSKA scored 50% of its two-point shots. In the last two games, however, CSKA has made just 28 of 82 shots inside the arc (33.7%). Being more effective around the basket is critical for CSKA, as it is powering the glass well (11.4 orpg.). CSKA ranks second in three-point shooting percentage (41.6%) and that will help spread the floor and create better scoring chances down low.

The basketball match between FC Barcelona vs CSKA Moscow will be played at Palau Blaugrana, Catalonia, Spain.  The arena can hold around 7,585 spectators.

The basketball match between FC Barcelona vs CSKA Moscow will start at 1:30 AM IST on November 30, 2019.

The match between FC Barcelona vs CSKA Moscow will not be telecasted in India. The live streaming will be available on EUROLEAGUE.TV. Live Scores will also be available on euroleague.net official website.

FC Barcelona: No such news of injuries or suspension coming from the team’s dugout. All the players are fit for playing this game.

CSKA Moscow: No news of injuries or suspension in the CSKA Moscow side. 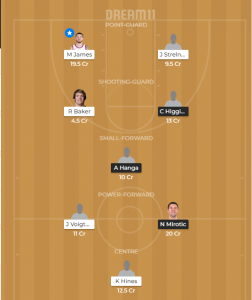