Denver is hoping to build some momentum of their own after notching back-to-back wins of their own to enter with an identical 5-2 mark tally in the points table. The home team is already dealing with so many injuries with the last one coming in the form of Gary Harris who sustained a head injury. He could have been a key player for his side but unfortunately, he won’t be a part of the playing five. Meanwhile, Denver Nuggets will eye its third consecutive win when Philadelphia 76ers come to the town for a regular-season matchup at Pepsi Centre. Nuggets won their last two games against Orlando Magic and Miami Heat.

The 76ers opened the regular season on a five-game winning streak but have since lost two in a row to enter the weekend with a 5-2 overall record. Philadelphia will be concluding a four-game Western Conference road trip on Friday in Denver before returning to the Wells Fargo Center for a quick two-game homestand. In order to improve their rankings, they would have to beat Denver Nuggets. They already have a big advantage as the home team would be playing without three of their major players.

The match between Denver Nuggets vs Philadelphia 76ers will be played at the venue Pepsi Center, in Denver, Colorado.  The capacity of the Arena has around 18,000 spectators.

The match between Denver Nuggets vs Philadelphia 76ers will start at 7:30 AM IST on November 9, 2019, Saturday.

The match between Denver Nuggets vs Philadelphia 76ers will be telecasted in India on the Sony Sports Network. You can also watch it online on the SonyLIV app. Live Score & Streaming will also be available on the NBA official website.

Denver Nuggets: Gary Harris is injured as he sustained left ankle sprain in the previous game. Will Barton is also in the questionable list of playing five as he injured his forehead badly in the last match.

Philadelphia 76ers:  Ben Simmons will be rested for this game as he is yet to be confirmed fit by the doctors. Shake Milton has also been sidelined due to his ankle injury. 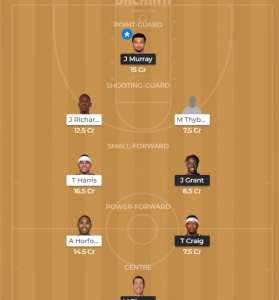