ZAL vs BAR Dream11 Prediction: The round 7 phase of the regular season match of the Turkish Airlines Euro league will be played between Zalgiris Kaunas vs FC Barcelona at the home arena of the eighth-ranked Zalgiris Kaunas on Friday.

Zalgiris has 3 wins and 3 losses till now with their last game as they defeated Fenerbahce Beko Istanbul in a close encounter last week in round 6. In today’s match, the Zalgiris Kaunas will be welcoming one of the strongest and most powerful European basketball teams i.e., FC Barcelona in their home arena as they hope to continue their last match’s winning momentum. The key player for the side is Zach Leday who has scored 16 points in the last match.

Having won 5 out of the total 6 matches, FC Barcelona has been as strong as ever in the ongoing Euro league. Their only loss came against the current table-toppers Armani Exchange Milan as they lost by 70-83. However, Brandon Davies was the top scorer for the side with 15 points followed by Nikola Mirotic who scored 13 points against the Milan. These two players would be the key for the side’s positive outcome in the match against the home team Zalgiris Kaunas.

The match between Zalgiris Kaunas vs FC Barcelona will be played at the venue Zalgiris Arena, Kaunas, Lithuania.  The capacity of the Arena has up to 15,415 spectators.

The match between Zalgiris Kaunas vs FC Barcelona will start at 11:30 PM IST on November 8, 2019.

The match between Zalgiris Kaunas vs FC Barcelona will be telecasted on Sony Ten 1. The live stream will be available on the Sony Liv app. live Scores are also available on euroleague.net official website.

Zalgiris Kaunas: Team Point Guard Alex Perez has been declared fit and is set to play this game. Laurynas Birutis has been ruled out due to the knee injury. While Marius Grigonis who suffered a foot injury last week is tentative to play this game as he is being monitored.

FC Barcelona: The presence of Pau Rias is still not confirmed as he is still recovering from his injury. Team’s Victor Claver will be out for the next 2-4 weeks due to the injury. 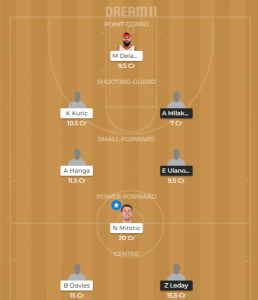