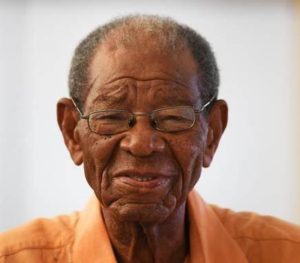 Legendary West Indies batsman, Sir Everton Weeks has died at the age of 95.  He suffered from a heart attack in 2019 and was not keeping well healthwise after that.

Sir Everton Weeks along with Clyde Walcott and Frank Worell formed the Barbados born trio, “The three Ws” who dominated world cricket in the post-war era. Weeks, who was easily the best batsman among the three, played 48 Tests for West Indies and scored 4,445 runs at an average of 58.61.


“Our hearts are heavy as we mourn the loss of an icon. A legend, our hero. Our condolences go out to his family, friends, and many fans around the world.”. West Indies Cricket said in a Tweet.

Our hearts are heavy as we mourn the loss of an icon. A legend, our hero, Sir Everton Weekes. Our condolences go out to his family, friends and many fans around the world. May he rest in peace. ?? pic.twitter.com/RnwoJkhjPd

Tribango Knight Riders, one of the teams of Caribbean Premier League, also expressed their sincere condolences to the master.

“One of the most gifted batsmen in Caribbean history, and the last of the legendary ‘three W’s’.”  said Tribango Knight Riders in a Tweet.

One of the most gifted batsmen in Caribbean history, and the last of the legendary 'three W's ❤️

Weekes has the 10th highest average in Test history especially among those batsmen who have played at least 20 innings. He was also part of that West Indies team which registered victory on England soil in 1950.

He made his Test debut in 1948 and played till 1958. Owing to his amazing performances in the field of cricket, he was given Knighthood in 1995.

He was shifted to ICU in 2019 after suffering a massive heart attack.

“A most amazing pioneer in West Indies cricket. A tremendous gentleman and a wonderful human being. He was literally a founding father of our cricket.” said Cricket West Indies President Ricky Skerritt in a Tweet.

“We salute a great West Indies icon; Sir Everton made an invaluable contribution to the sport, his country, and the region. We were blessed to have him among us, may his soul rest in peace.” West Indies Players Association also said in a statement.