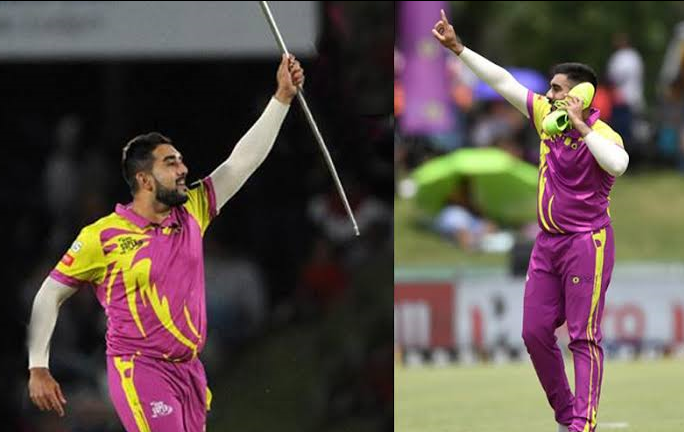 The game of cricket has seen many cricketers who have out of the box ways to celebrate a bowling or batting feat on the field. South Africa’s Imran Tahir takes a lap on the field after every wicket that he takes. Similarly, West Indies’ Sheldon Cottrell gives the soldier pose. Latest to join that list is South Africa’s Tabraiz Shamsi, who, as bizarre as it may sound, performed a magic trick in a recent Mzansi Super League game.

The spinner took out a red handkerchief from his pocket before turning it into a stick. Playing for Paarl Rocks in the South African T20 extravaganza, Shamsi got the big wicket of David Miller and celebrated by turning a handkerchief into a stick. However, the wicket came in a losing cause because Durban Heat eventually beat Paarl Rocks by six wickets.

The video of Shamsi’s celebration has gone viral on social media, with many fans saying it is the greatest celebration ever seen. MSL’s official handle tweeted the video of the magic trick and captioned the post as: “WICKET! A bit of magic from @shamsi90 #MSLT20”.

A bit of magic from @shamsi90 🎩
#MSLT20 pic.twitter.com/IxMqRYF1Ma

Talking of the match, Shamsi took two wickets but was also expensive, having given away 37 runs in his four overs.

Durban Heat won the toss and put Paarl Rocks into bat as Cameron Delport (84 off 49 balls) and captain Faf du Plessis (66 not out off 36 balls) stood out with the bat and helped the side post 195 for two in their 20 overs. Alex Hales, who opened the batting for Heat, smashed a 55-ball 97 and remained not out but James Vince’s run-a-ball 25 spoiled the party.

Talking of Tabraiz Shamsi’s career, the spinner has not been a regular in the national team. He has played two Tests, 17 ODIs and 16 T20Is, from which he has six, 19 and 12 wickets respectively. But he has played for quite a few T20 leagues, including the IPL where he was a part of the Royal Challengers Bangalore team.