VIL vs GRD Dream11 Prediction: The sixth match of the La Liga will be played between Villarreal FC and Granada FC at the Estadio de la Cerámica in Spain. Villarreal FC reached the quarterfinals of the Europa League in the 2018-2019 season but they had a poor last season in La Liga where they finished below the top six. Coming from division 2 of the Spanish football, Granada FC will look to make a mark in their opening game. The side has got some potential in the defensive line up and the return of the striker Roberto Soldado might add to the winning cause of the squad.

VIL vs GRD Match timing & Match Details: The match is scheduled to start at 12:30 AM IST, on 18th August 2019. The two teams will meet at the Estadio de la Cerámica (El Madrigal), in Villarreal, Spain.

VIL vs GRD Broadcast Details: The Villarreal Vs Granada game will be broadcasted on Facebook as the platform has the rights to show La Liga matches live in India. You can watch Villarreal vs. Granada live stream online if you are registered member of Bet365.

Villarreal FC
Gerard Moreno – The 27-year-old striker looks ready for this season as he was the second-highest goalscorer in the last season, scoring 12 goals in 46 games and he was also involved in 2 assists.
K T Ekambi – The forward got 18 goals and notched 7 assists last season across all competitions, and would be hoping to replicate his performance.
Santi Cazorla – The experienced midfielder is the playmaker for the side and would be a constant threat for the opposition. He is also the penalty-taker for his side. He got 6 goals and 11 assists last season.

Granada FC
Roberto Soldado – The 34-year-old striker returns to La Liga with Granada FC. His experience of having played across leagues will come-in handy for the newly-promoted side. His inclusion makes the Granada side strong. Last season he got 6 goals and 5 assists and would look to get more this season. 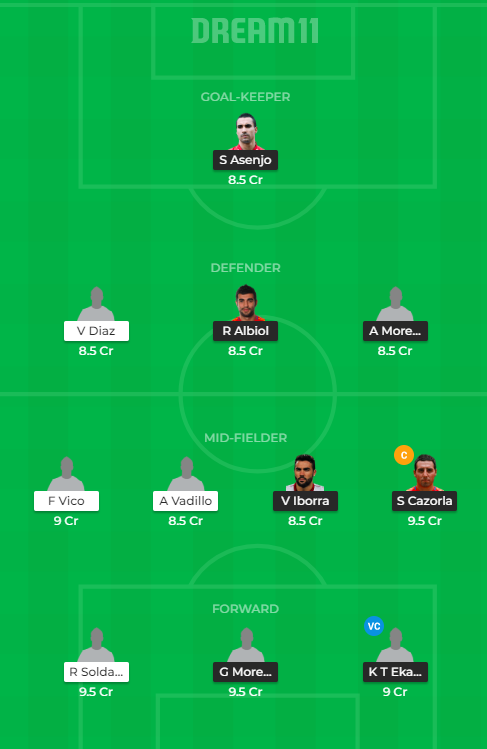 Catch all the live updates of VIL vs GRD Football Match, including live scores and match report. This time VIL vs GRD Dream11 Match Prediction will depend on the final team line-ups.