VAN vs PT Match Timing and Match Details: The football match of Major League Soccer between Vancouver Whitecaps FC and Protland Timbers will be played on 11th Ausgust, 2019 at 8:30 AM IST. The match will be played at the Providence Park

VAN vs PT Live Stream & Live Score: The football match of Major League Soccer between Vancouver Whitecaps FC and Protland Timbers will not be telecasted in India. Live score updates and live stream will be available on SonyLIV and https://mls-live.stream/

VAN vs PT Best Players:
Vancouver Whitecaps Top Players-
Fredy Montero: The Colombian forward has 6 goals and 2 assists to his name and has been the stand-out player for his side.
In-Beom Hwang: The South Korean controls the game for his side, and holds possession. He has 2 assists and a goal to his name and looks set for more.
Portland Timbers Top Players-
Diego Valeri: The versatile Argentine midfielder orchestrates play and not only controls game in the midfield, but also contributes hugely to the attack. With an average of 2.5 shots per game, he has 6 goals and 6 assists in the 21 games played.
Brian Fernandez: The Argentine forward has 8 goals and an assist to his name in just 11 games and enjoys a prolific record.
Sebastian Blanco: Blanco adds further Argentine flavour to the side, and has had major goal contributions. He has 4 goals and 9 assists to his name this domestic season, and is a stellar player. 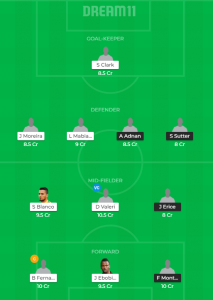 Catch all the live updates of VAN vs PT football match, including live scores and match report. This time VAN vs PT Dream11 Prediction will depend on the final team line-ups.