UP vs TAM Dream11 Match Prediction, Live Score
In Match 29 of Pro Kabaddi 2019, a resurgent UP Yoddha will face a confident Tamil Thalaivas side at Patliputra Sports Complex, Patna on 7th August, 2019.

UP Yoddha came back from the Ashes to register their first win of the competition, beating U Mumba by a score-line of 27-23. Tamil Thalaivas too overcame their two-match losing streak, beating Haryana Steelers 35-28.

UP Yoddha had found it hard to get inspiration, which changed with the return of Rishank Devadiga in the side, who didn’t do much on the mat, but helped to inspire the side. Left Corner defender Sumit has been the side’s best bet in their own half of the mat, while Monu Goyat has been their best bet in the raiding department, scoring 15 points in 4 matches.

For Tamil Thalaivas, the star of the show has been Raid Machine Rahul Chaudhari, who has been backed magnificently by Manjeet Chhillar at the heart of defence. Rahul has 34 raid points in 4 matches, while Manjeet has successfully managed to secure 18 tackle points in 4 matches.

UP vs TAM Match Timing & Match Details
The kabaddi match between UP Yoddha and Tamil Thalaivas will be played at the Patliputra Stadium, Patna on 7th August at 7:30 PM IST.

UP vs TAM Telecast Details
The kabaddi match between UP Yoddha and Tamil Thalaivas will be telecasted on Star Sports Network. Live score updates and live streaming is available on Hotstar.

UP vs TAM Best Players

UP Yoddha Top Players:
Monu Goyat – Monu has been one of the very few positives the UP Yoddha side has thus far. He hasn’t lived up to the billing yet, but has scored 15 points in 4 games, which isn’t the worst. He also has a successful tackle to his name.

Sumit – UP has struggled pretty much throughout their campaign thus far, but Sumit has been a bright spark in defence. The left-corner defender has been good and has scored 10 points in the 4 matches played.

Tamil Thalaivas Top Players
Rahul Chaudhari– Raul “Raid Machine” Chaudhari has been the best player for Thalaivas this season, who would be glad to have bought him at the auctions. He has 38 points in 4 matches, 34 raid points and 4 tackle points. He is expected to run riot over UP’s defence.

Manjeet Chhillar– With 18 points in 4 matches, Manjeet has been the pick of Tamil Thalaivas defenders. He has bossed the left-corner department and been a nightmare for opposition defenders.

UP vs TAM Dream11 Team Prediction 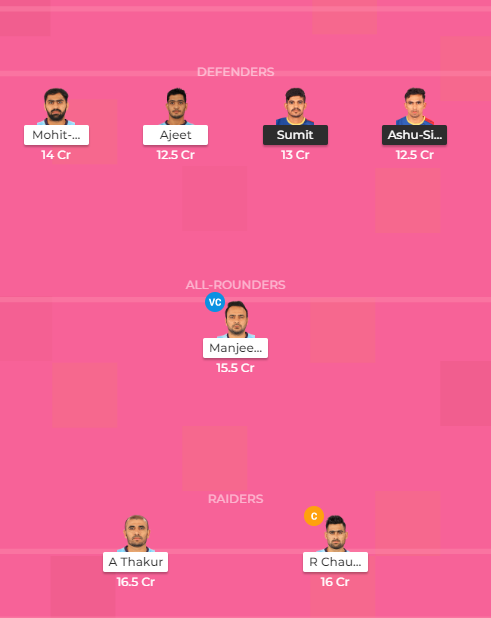 Catch all the live updates of UP vs TAM Pro Kabaddi match, including live scores and match report. This time UP vs TAM Dream11 Prediction will depend on the final team line-ups.