UP Vs HAR Dream11 Prediction:  Match 111 of the Vivo Pro Kabaddi League marks the beginning of the Chandigarh leg of the tournament. The first match of the leg will be played between Haryana Steelers and UP Yoddha. Their last clash took place in the Ahmedabad leg where Haryana Steelers beat the UP Side in a close match as the final scorecard of the match was 36:33.

UP Yoddha: The side would be riding high as they are having a good run in the tournament. After losing to U Mumba with just 3 points as the final scorecard of the match was 39:36. The side came back strong in their next match against the Tamil Thalaivas as they finished their Jaipur Leg on a high. It was a one sided match as they totally outclassed the Tamil side. Raider Shrikant Jadhav scored 8 points as he was the top scorer of the side. He got a good contribution from Surender Gill as he scored 7 points in the match. Defender Sumit is having one of the best phases of his forms as he registered his fifth High 5 of the season. Having a bit low key performance against the Haryana Steelers, UP Yoddha would want to have a good performance against them tonight.

Haryana Steelers: After losing to Bengal Warriors,  but they came back with a clinical win over Patna Pirates in their last match of the Jaipur Leg with a final score of 39:34. They are now placed third in the points table. Raider Vikash Khandola scored 13 points in the match as he tally of the Super 10s this season has reached to 8. Prashanth Kumar Rai scored 7 points in the match as he supported Vikash in the match. It was a clinical performance from the side. They will be playing their first match of the Chandigarh leg today and would be hoping for a good and dominating start to their new leg today.

UP Vs HAR Match Timing & Match Details:
The Kabaddi match between UP Yoddha and Haryana Steelers will be played at Tau Devilal Sports Complex, Panchkula, Chandigarh on 28th September 2019 at 7:30 PM IST.

UP Vs HAR Broadcast Details:
The Kabaddi match between UP Yoddha and Haryana Steelers will be telecasted across the Star Sports Network in multiple languages. Live Score updates and live stream will be available on Hotstar.

UP Vs HAR Best Players:

UP YODDHA:
Shrikant Jadhav- The raider has become one of the mains in the raiding department from the last few games. Shrikant had scored 106 points in 17 matches and has 2 Super 10s this season.

Sumit-  The mulish defender has been the in charge of his side’s defense unit. Till now he has scored 60 points in 17 games that includes 5 High 5s too. He has been doing well from the past few matches and is one of the top defenders of the side.

HARYANA STEELERS:
Vikash Khandola- The star raider is one of the mains in his team. He has played 14 games scoring 142 points in this season. Vikash has 8 Super 10s this season as his dominance continues.

Vinay– Vinay is the second-best raider for his side and provides great support to Vikas Khandola in scoring points. He has 84 points in 17 games so far and looks to take his game on another level in the upcoming matches. He has scored 2 Super 10s this season.

Suggested UP Vs HAR Dream11 Team: 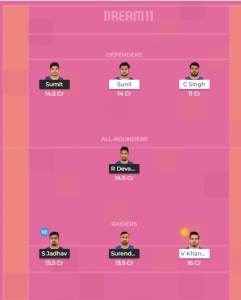 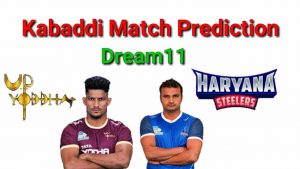 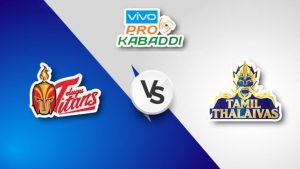 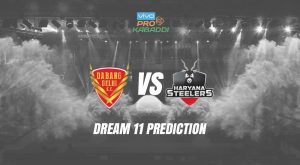