UP vs HAR Dream11 Prediction: UP Yoddha take on Haryana Steelers on the back of a win against defending champions Bengaluru Bulls at the Eka Arena by TransStadia, Ahmedabad, on 14th August 2019 at 7:30 PM.

UP have conceded the second-most points with 237 in 7 matches, while Haryana has conceded 193 points in 6 matches. However, both sides are 10th and 11th when it comes to points scored with only Jaipur behind the two, but have played only 2 games.

Interestingly, both teams come into the game on the back of beating Bengaluru Bulls and would be looking to crawl their way up in the table and this might turn out to be a very crucial game.

Vikash Kandola and Vinay have taken over from Naveen and have been the stars of the show for Haryana Steelers, while Vikas Kale and Dharmaraj Cheralathan have held the fort in defence.

For UP Yoddha, Monu Goyat, Shrikant Jadhav, and Sumit have been the stellar performers.

UP vs HAR Match Timing and Match Details: The UP Yoddha vs Haryana Steelers match will be played on 14th August 2019 at 7:30 PM at the Eka Arena by TransStadia.

UP vs HAR Broadcast, Live Score and Live Streaming Details: The UP Yoddha vs Haryana Steelers match will be telecasted on the Star Sports Network in Hindi and English. Live score updates and live stream are available on Hotstar.

UP vs HAR Best Players:

UP Yoddha Top Players
Shrikant Jadhav – The raider has been prolific for UP Yoddha and was the major architect of their win against Bengaluru Bulls, scoring 9 points. He has scored a total of 24 points in 7 games and has even contributed in the defensive work.
Monu Goyat – The raider has been the top-scoring player for UP Yoddha, scoring 31 points in the 7 games thus far. He has been the lead raider of the side and would test the Haryana defence.
Sumit – The lead defender of the side, Sumit has held the fort at the left-corner for UP Yoddha, being their top-scoring defender, scoring 24 points in 7 matches.

Haryana Steelers Top Players
Vikash Kandola – He is on a point-scoring spree, averaging 10 points per game, having got 30 points in 3 games. He has been a stand-out raider for his side and has taken over from Naveen.
Vinay – He has played second-fiddle to Kandola, and has added to the team’s raiding as well as tackling departments. He has 26 points in 6 games.
Vikas Kale – He came into his own in the last game, scoring 6 points, and completing a High-5 in the last game against a string raiding unit of Bengaluru Bulls boasting of the likes of Pawan Sehrawat and Rohit Kumar. He has 14 points in 6 games but is seemingly at his best now.

Suggested UP vs HAR Dream11 Team: 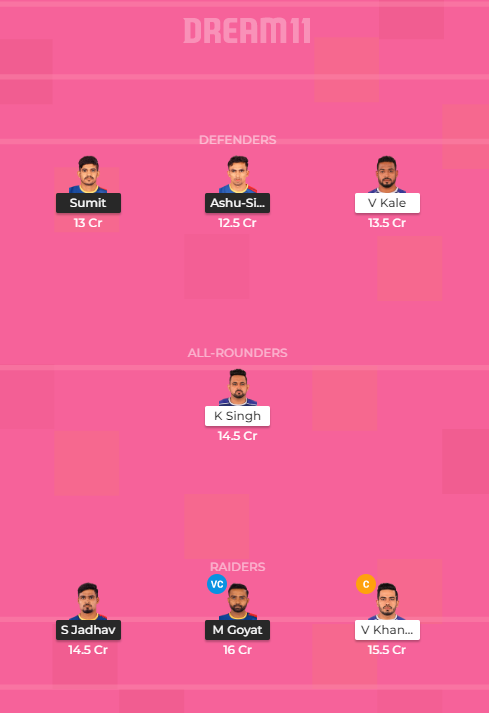 Catch all the live updates of UP vs HAR Kabaddi Match, including live scores and match report. This time UP vs HAR Dream11 Match Prediction will depend on the final team line-ups.