TOR vs VK Dream11 Prediction: There is huge excitement among cricket fans as Global T20 Canada’s second season kick-starts. This tournament was a major success in 2018, and is expected to be bigger and better this time around. The Global League, which is set to see a host of big names, is starting with the clash between last season’s champions Vancouver Knights and the Yuvraj Singh loaded Toronto Nationals. Toronto Nations have called up Indian finisher Yuvraj Singh. Brendon McCullum and Trent Boult will also play alongside Yuvraj Singh, in what looks like a potent unit. They also have a quality spinner in their ranks in the form of Sandeep Lamichhane.

Vancouver Knights also have big names like Chris Gayle and Andre Russell, which gives them the much needed fire-power. They have also called South African Dussen, who had a wonderful World Cup for South Africa.

The cricket match between Vancouver Knights and Toronto Nationals will be played at the CCA Centre, Brampton. The pitch is a perfect batting surface and will be a T20 delight. We can expect high scoring games and with power-hitters on either side, it is expected to be a run-feast. Brompton is hosting a cricket match for the first time and what a treat it might turn out to be for the fans.

The cricket match between Vancouver Knights and Toronto Nationals will be played on 25th July, 2019 and 10:00 PM IST.  The match will be telecasted on Star Sports Network. Live Score updates and live stream will be available on Hotstar.

Yuvraj Singh – Yuvraj Singh can be a surprise in Global T20 Canada. With him promising a feast of sixes, we could see a very dangerous Yuvraj Singh in the league, devoid of any pressure.
His strike rate in T20I is 136.38. He scored 3920 run in T20s and one of the finest T20 batsmen of all time.

Kieron Pollard – Pollard is a T20 specialist all-rounder and played all the T20 leagues across the world. He had a wonderful IPL this year and his one innings as captain was also among the finest in T20s. He can change game within few overs.

Chris Gayle – Chris Gayle is the highest run getter in T20s. He has scored 12808 runs with the strike rate of 147.33. He scored 21 hundreds and 80 fifties in T20s. His numbers are incredible. He is in terrific form in the last year, and would be now, looking to make a mark in Canada.

Andre Russell – Andre Russell is a sensation in T20 cricket. He just needs a few balls to change the game completely. He was exceptional in IPL for KKR and has gone one to become one of the most feared batsman in this format. He has produced some miracles in T20s and his team would be hoping for something similar from him. 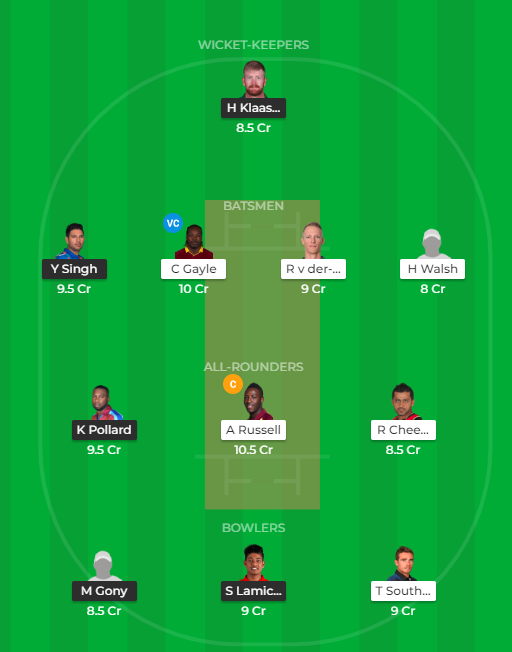