TN vs UP Dream11 Prediction: Following two back to back wins in the first couple of contests, Tamil Nadu would be locking horns with Uttar Pradesh in an attempt to seal a hat-trick of triumphs and a top spot in Group B rankings. The likes of Dinesh Karthik (48) and R Sai Kishore (3/19) rendered match-winning performances in the recently finished game against Rajasthan and would be hoping to emulate a similar show in the forthcoming duel at Thiruvananthapuram. On the other hand, Uttar Pradesh would be coming into the contest on the back of a humiliating defeat at the hands of Vidarbha. Led by Samarth Singh, UP lost by a margin of 9-wickets and would expect to turn the tables in their favor in the upcoming feud.

TN vs UP Match Details & Broadcast:

The match between Tamil Nadu and Uttar Pradesh will take place on November 11 at Greenfield International Stadium, in Thiruvananthapuram. The live telecast will commence from 9:30 AM onwards on Star Sports Network and Hotstar.

TN vs UP Squads

TN vs UP Playing XI

TN vs UP Best Players

The wicket-keeper batsman has always been one of the top-performers for Tamil Nadu across domestic circuits. The previous game against Rajashtan was a testament of the same as he scored 30-ball 48 and affected a dismissal whilst guarding the stumps. The 34-year-old could be easily backed for the captain/vice-captain’s spot in TN vs UP Dream11 lineup.

The 28-year-old all-rounder was highly economical in the lately played game against Rajasthan. Although Shankar didn’t score much with the bat, he surely could be backed to play a decent inning for Tamil Nadu in the highly-anticipated game at Thiruvananthapuram.

Not many positives for Uttar Pradesh in the recently concluded match against Vidharbha. However, one shouldn’t undermine Akshdeep’s all-round potency, for he could become a destroyer be it with the bat or with the ball at the situation’s behest.

Wicket-keeper batsmen are always beneficial in any Dream11 unit. Upendra Yadav, like other wicket-keepers, remains a viable pick for Fantasy XI lineup. The fact that he bats up the order and is lightning fast when behind the stumps is something that accounts for his addition to the game against Tamil Nadu. If the pitch favors, Upendra could hit those sixes and fours at will, making him a definite addition for the coming contest.

TN vs UP Dream11 Team 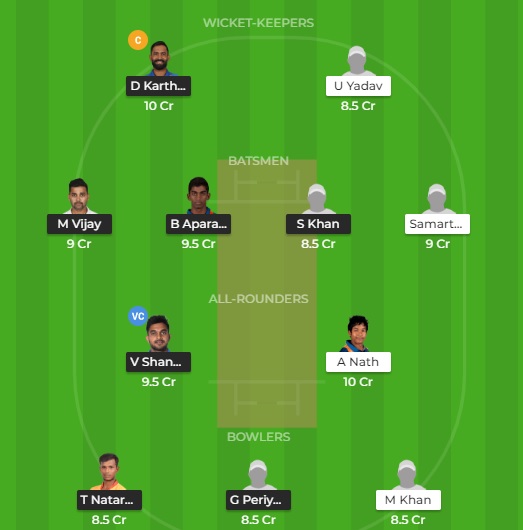