SKW vs KIH Dream11 Prediction: The KBO 2020 is underway and one of the matches to be played at the Gocheok Baseball Stadium in South Korea. Many people would already guess the match-winner among the two in tomorrow’s contest. However, we will provide you with one of the best SKW vs KIH Dream11 Prediction teams to win the head to head contests as well as the grand leagues. For those who wish to watch SKW vs KIH Live Score and Match Highlights, they can tune in to the Fan Code app by Dream11.

SK Wyverns is one of the worst-performing teams in the Korean Baseball League 2020 so far, having just registered a single win and nine losses. There have been instances when the Wyverns players manage to suppress the run flow of the opposition but at the same time fail to capitalize on the opportunities when it comes to batting. They have lost their last nine matches and the last game against NC Dinos ended with a result of 11:5. Wyverns scored five runs, that was hit by Jun Hyeok, Jamie Romak, Lee Hong Ku, Kim Chang Pyung and Kim Sung respectively. Among the Pitchers, Baek Seung Geon had 3 innings to Pitch as he conceded four runs in as many as five hits to the Dinos. But he also had three strikeouts, most among his fellow pitchers.

Kiwoom Heroes are fifth in the KBO 2020 regular season with five wins and six losses till now. Kiwoom last faced LG Twins and defeated them in a blistering match that ended in their favour. The final scores after the match were 9:4 as Seong Geon Chang and Lee Ji Young scored two runs each. Kim Ha Seong was at bat for six times out of which he scored one run and 3 runs batted in. Most of the players in the Heroes make SKW vs KIH dream11 team an interesting side and a sure shot to win the grand leagues and the H2H contests. The Pitchers turned out to be very economical as they managed to leak just five runs in contrast to their 11 runs. Eric Jokisch did Pitching in six innings in which he didn’t concede a single run but had three strikeouts.

SKW vs KIH Head to Head: 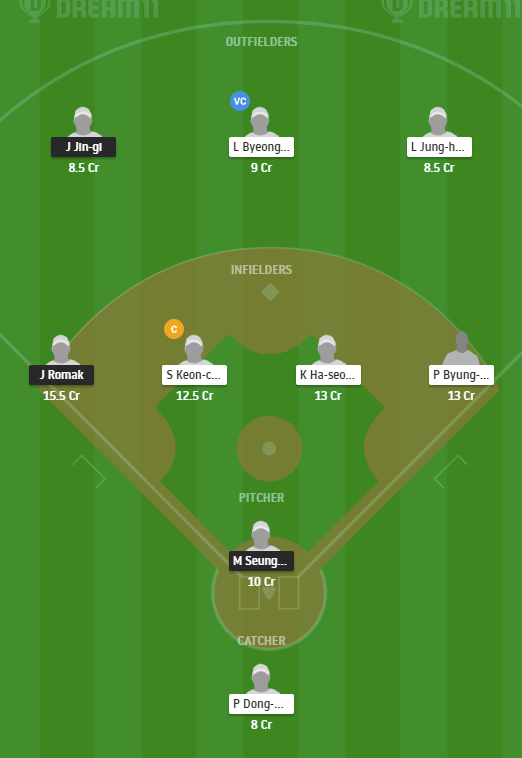