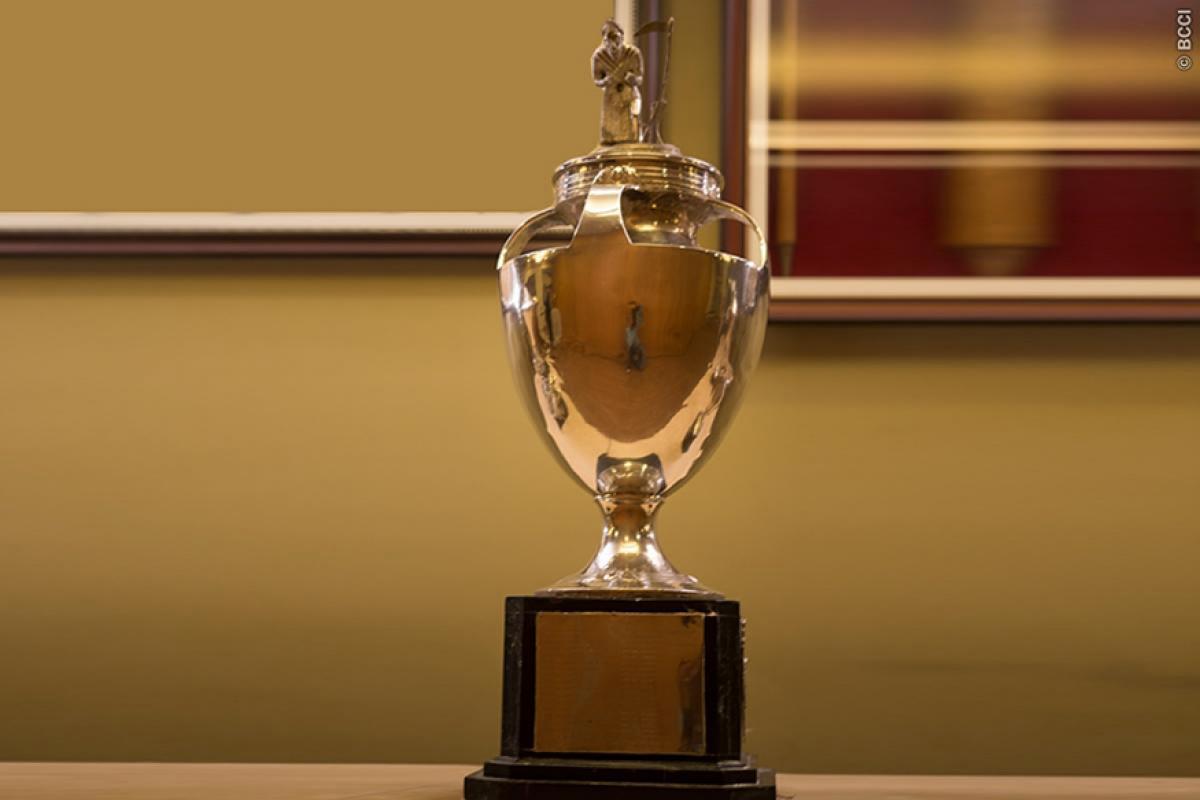 Out of the 18 matches in Round 7 of 2019/20 Ranji Trophy, 11 yielded outright results. In Group A, Andhra Pradesh, Rajasthan, Gujarat earned good wins over their opponents. The match between Delhi and Bengal ended with both teams earning 1 point each.

In Group B, Saurashtra, Karnataka, Uttar Pradesh registered wins in contrasting fashions. The match between Mumbai and Himachal ended with both teams earning 1 point each.

Group C saw Maharashtra, Odisha, Services pulling off wins. The matches between Haryana and Uttarakhand, Jammu and Kashmir-Chhattisgarh ended in draws with Haryana and Chhattisgarh earning 3 points each. 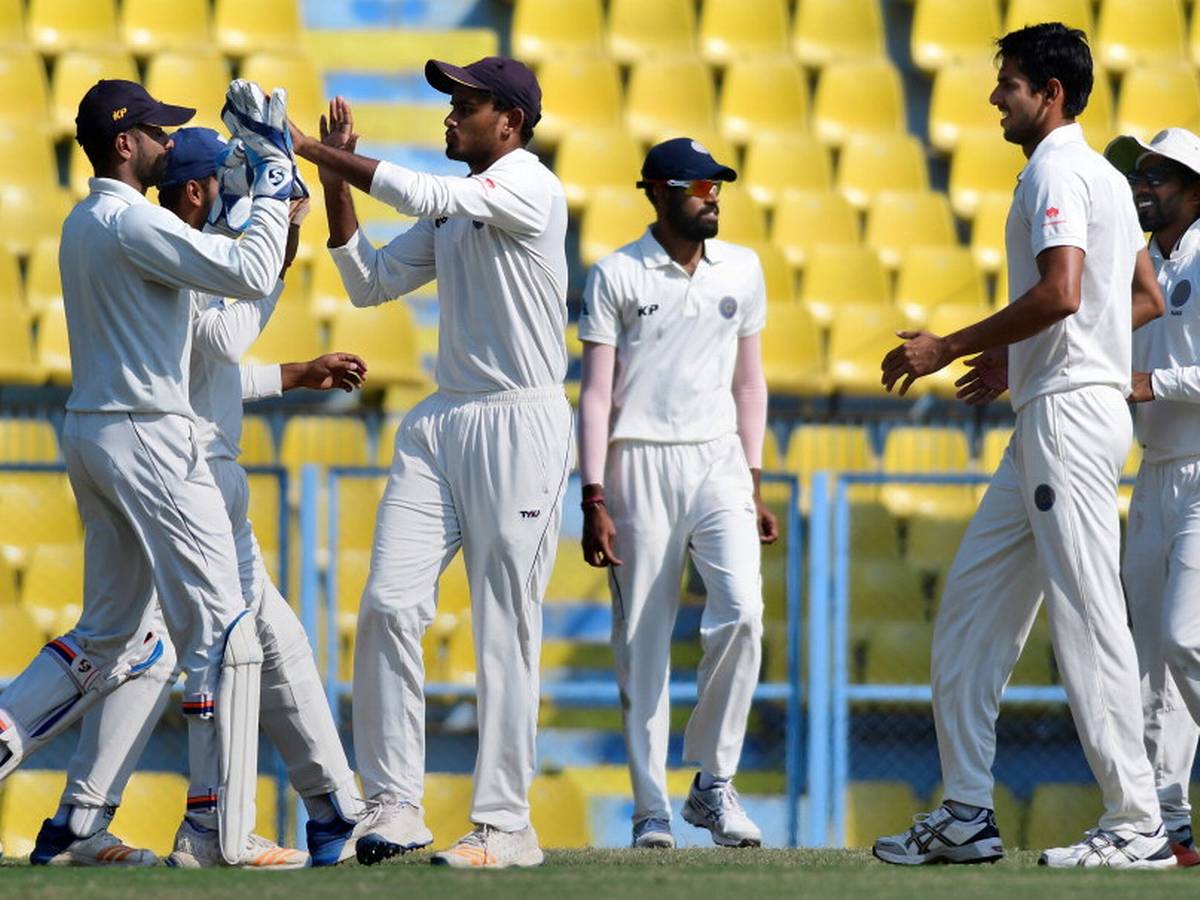 In the Plate Group, only Sikkim and Goa registered wins. The rest of the matches resulted in the first innings result.

Andhra Pradesh continued their superb form beating Kerala by 7 wickets to consolidate their top position played at Ongole. Andhra captain Girinath won the toss and decided to field first. It was a superb bowling performance by the hosts who bowled out Kerala for 162 runs. In reply, Andhra Pradesh posted 255 with Prashant Kumar the top scorer with 79.

In their 2nd innings, Kerala could not score big runs and were bowled out for 135. Andhra Pradesh did the job by winning the match by 7 wickets.

Rajasthan produced a dominating display to beat Hyderabad by 9 wickets played at Rajiv Gandhi International Stadium, Hyderabad. It was a low scoring affair with the bowlers dominating. Hyderabad captain Tanmay Agarwal won the toss and decided to bat first. The decision did not pay off as the hosts were bowled out for 171 runs. In reply, Rajasthan could only post 135 runs in the first innings with Ashok Menaria the top scorer with 42. 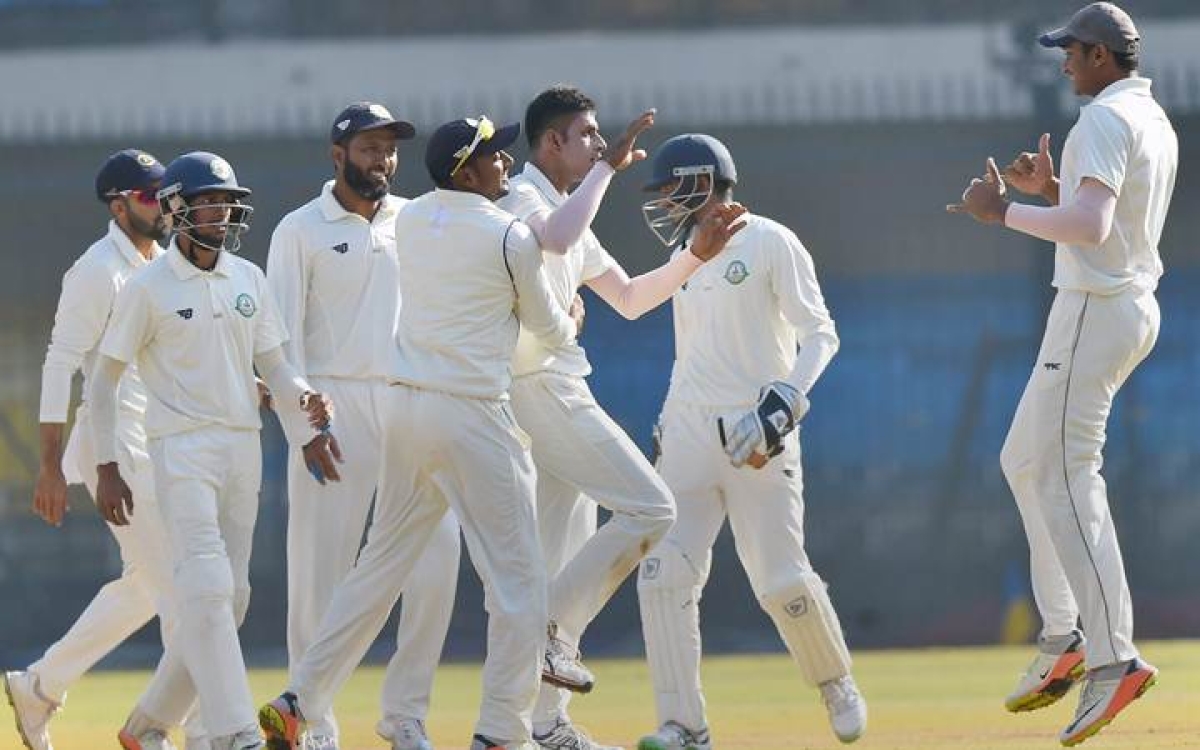 Hyderabad could not capitalise in the 2nd innings as they were bowled out for 156 runs. Chasing 195 runs to win, thanks to Mahender Singh 107 and Lomror 71, Rajasthan won the match by 9 wickets to register 6 points.

The match between Bengal and Delhi played at Eden Gardens, Kolkata ended in a draw with both teams 1 point each. Delhi captain Dhruv Shorey won the toss and decided to field first. On the first day, Delhi reduced Bengal to 100 for 4 before Anstup Majumdar and Shreevats Goswami added 117 runs for the 5th wicket. On the 2nd day, Majumdar was run out for a brilliant 99. Delhi bowled out for 318.

In reply, Delhi batsmen could convert starts into big scores. Dhruv Shorey was the top scorer with 65. Jonty Sidhu remained not out on 53 before bad light stopped play on day 4. Delhi ended with 242 for 7. Bengal and Delhi earned 1 point each.

Gujarat registered a 4 wicket win over defending Champions Vidarbha played at Lalabhai Contractor Stadium, Surat. Vidarbha captain Faiz Fazal won the toss and decided to bat first. The decision did not pay off as Vidarbha were bowled out for 142 runs. In reply, Gujarat posted 211 runs with Parthiv Patel top scorer with 58 and Chirag Gandhi remaining not out on 49.

Vidarbha in their 2nd innings were struggling at 104 for 6 before Akshay Wadkar 87 helped them to post 247 runs. Chasing 179 runs to win, Gujarat were struggling big time before Parthiv Patel knock helped chase down the target with 4 wickets remaining.

Saurashtra defeated Baroda by 4 wickets in a low scoring thriller played at Moti Bagh Stadium, Vadodora. Saurashtra captain Jaydev Undakat won the toss and decided to field first. The decision paid off as Unadkat ripped Baroda batting line up to finish with figures of 6 for 34 to bowl out Baroda for 154. In reply, Saurashtra struggled without Pujara and were bowled out for 142. Meriwala was the pick of bowlers for Baroda with figures of 5 for 64. 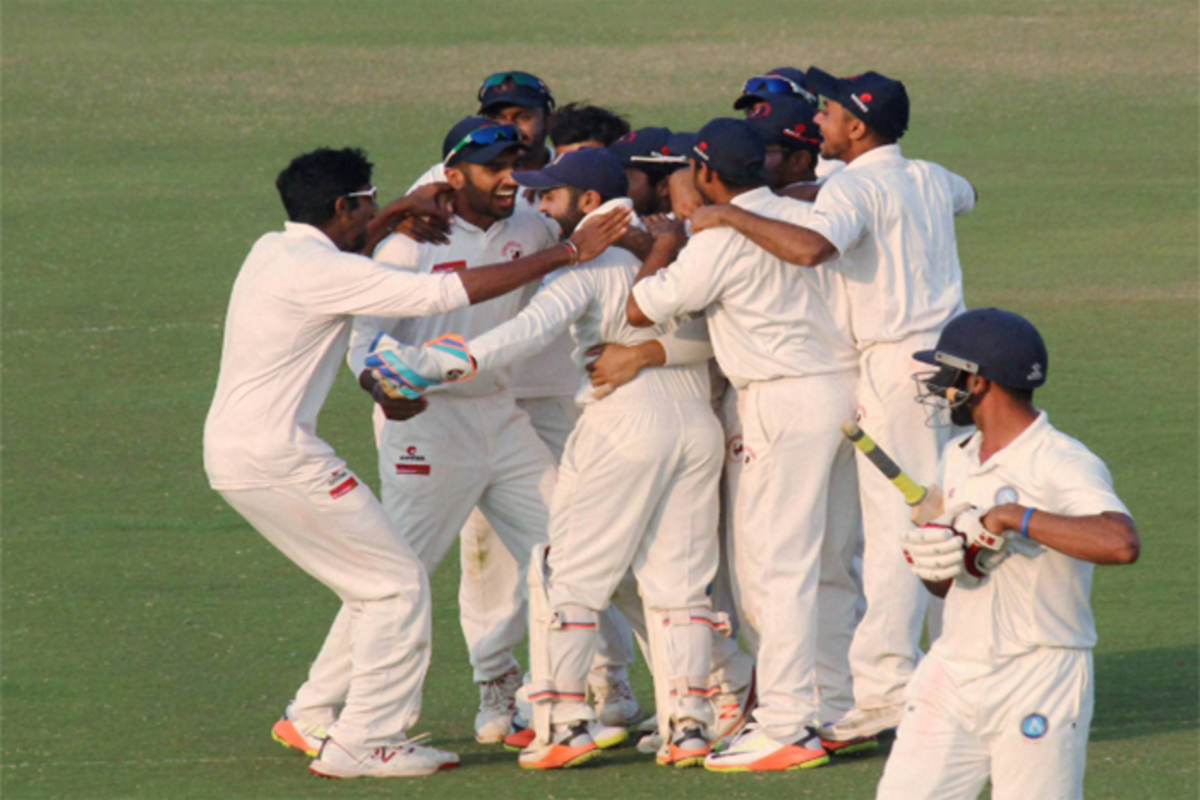 In the 2nd innings again, Unadkat bowled a stunning spell to finish with figures of 6 for 72. Deepak Hooda 52 and Yusuf Pathan 46 were top scorers for Baroda. Chasing 200 runs to win, Saurashtra were struggling at 113 for 6 before Vasavada and Prerak Mankad unbeaten 87 runs partnership helped them to win the match by 4 wickets.

Uttar Pradesh defeated Madhya Pradesh by 7 wickets to move into the fourth place played at Holkar Stadium, Indore. UP captain Ankit Rajpoot won the toss and decided to field first. A superb bowling effort by UP bowlers restricted MP for 230 runs in first innings.

In reply, the debutant Ravi Yadav took a hattrick for Madhya Pradesh. Saurabh Kumar led the recovery for UP remaining not out on 98 and helped UP post 216 runs.

Madhya Pradesh in their 2nd innings were bowled out for 160 runs. Ankit Rajpoot and Yash Dayal were the picks of bowlers. Chasing 178 runs to win, Aryan Juyal played a great inning remaining not out on 74 to help UP register 7 wicket win.

The match between Mumbai and Himachal Pradesh ended with both teams earning 1 point each played at Dharamshala. Himachal captain Ankit Kalsi won the toss and decided to field first. Mumbai were reduced to 71 for 4 before Sarfraz Khan scored another brilliant knock remaining not out on 226 to help Mumbai recover to 372 for 5. After the first day’s play, no play was possible for rest of 3 days.

Karnataka stormed to a 10-wicket win beating Railways in a rain-curtailed game at Karnail Singh Stadium, New Delhi. Karun Nair won the toss and decided to field first. Abhimanyu Mithun 4 for 51 and Prateek Jain 5 for 38 bowled out Railways for 182.

In reply, thanks to K Gowtham 41 and BS Sharath 62, Karnataka posted 211 runs in the first innings. Amit Mishra was the pick of bowlers for Railways with figures of 5 for 70.

Ronit More produced a magical spell on the last day taking 6 for 32 to bowl out Railways for 79. Rohan Kadam and Devdutt Paddikal helped Karnataka chase down the target of 51 without losing any wickets.

Maharashtra registered their 3rd successive win beating Tripura by 5 wickets at Agartala. Maharashtra captain Ankit Bawne won the toss and decided to field first. The decision paid off as Manoj Ingale 6 for 34 bowled out Tripura for 121 runs. In reply, thanks to Vishant More 78* and Bawne 62, Maharashtra posted 208 runs in their first innings.

Tripura batted much better in the 2nd innings posting 290 runs with Milind Kumar the top scorer with 67. Ashay Palkar took 5 for 62. 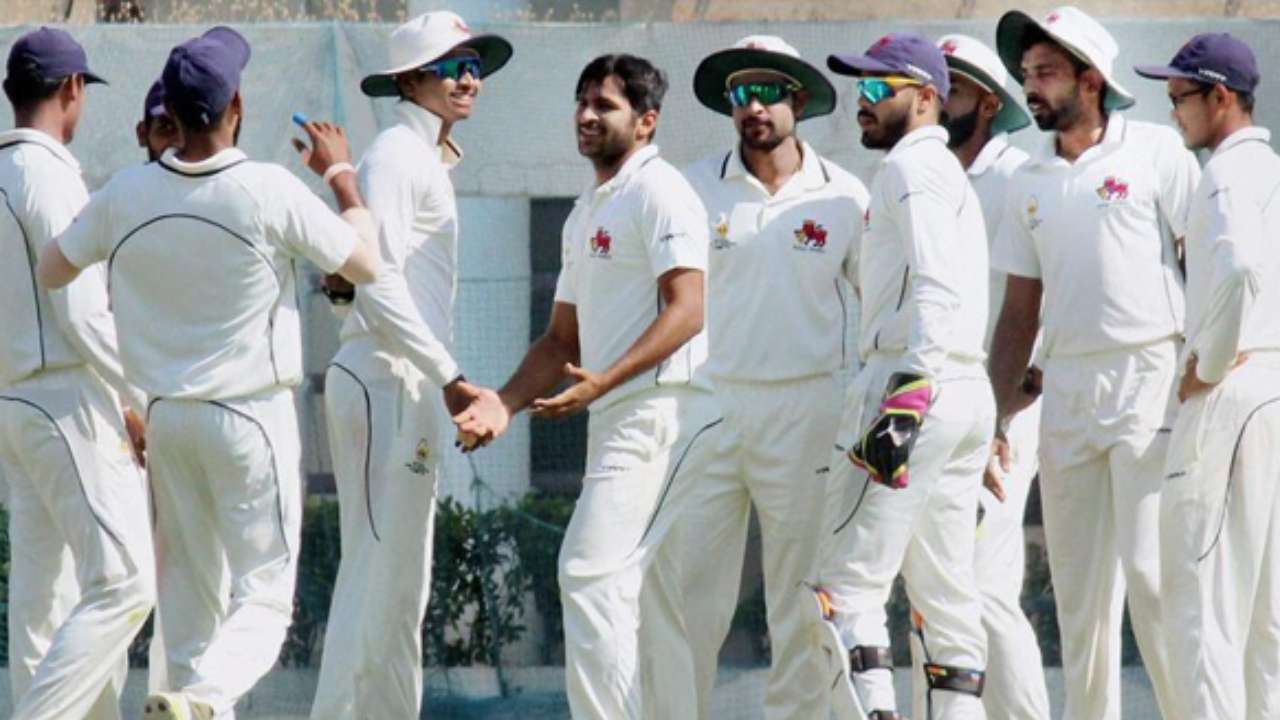 Chasing 204 runs to win the match, Maharashtra captain Bawne came to the rescue remaining not out on 61 to help the visitors register a 5-wicket win.

After losing to Jammu and Kashmir in the last round, Odisha came back strongly to defeat Assam by an innings and 3 runs played at DRIEMS Ground, Cuttack. Assam captain Gokul Sharma won the toss and decided to field first. It was a superb batting performance by Odisha batsmen who posted 436 runs with D Pradhan the top scorer with 79. Arup Das and Ranjit Mali took 4 wickets each for Assam.

In their first innings, Assam were bowled out for 238 runs. Ranjit Mali was the top scorer with 59. D Pradhan was the pick of bowlers for Odisha with 4 for 39. Follow on, Assam were 124 for 0 on the 4th day and were bowled out for 195. Subham Mandal 74 and Kunal Saikia 72 were top scorers. Rajesh Mohanty took 4 for 30, Surykant Pradhan and D Pradhan took 3 for 53 each.

Haryana earned 3 points in a rain-curtailed match against Uttarakhand played at Dehradun. Uttarakhand captain Tanmay Shrivastava won the toss and decided to bat first. The decision did not pay off as the hosts were bowled out for 109.

In reply, Haryana were struggling at 50 for 5 before Harshal Patel played a captain knock scoring 50 and took them to 142. Agrim Tiwari was the pick of bowlers with figures of 6 for 47. In their second innings, Uttarakhand ended on 109 for 3.

Services pulled off a remarkable win over Jharkhand by 118 runs played at Palam A Ground, New Delhi. Jharkhand captain Saurabh Tiwary won the toss and decided to field first. A superb knock by Ruturaj scoring 75, Mohit Ahlawat 69 helped Services post 279 runs. Rahul Shukla was the pick of bowlers with figures of 7 for 106.

In reply, Jharkhand were bowled out for just 153. Sumit Kumar was the top scorer with 38 for Jharkhand. DG Pathaina was the pick of bowlers with 4 for 51.

Chhattisgarh registered the first innings points against Jammu and Kashmir in a rain-curtailed match. After posting 270 for 4, Chhattisgarh captain declared their innings. In reply, J and K were bowled out for 168.

Goa registered a commanding an innings and 336 runs win over Arunachal Pradesh. Arunachal Pradesh captain Song Tacho won the toss and decided to field first. Amonkar 160, Govekar 160, Smit Patel 137* and Amit Verma 122* helped Goa post a massive total of 589 for 2 declare. In reply, Arunachal Pradesh were bowled out for a paltry total of 83 runs in first innings.

Asked to follow on, Arunachal Pradesh were bowled out for 170 runs in the 2nd innings. Rahul Dalal was the top scorer with 68. Amit Verma took 6 for 71 for Goa.

Sikkim defeated Manipur by 232 runs to register 6 points. It was a low scoring thriller as Sikkim were bowled out for 169 runs in the first innings. In reply, Manipur struggled and skittled for 91 runs.

Sikkim fared much better in the 2nd innings posting 266 runs. In their 2nd innings, Manipur were bowled out for 112 chasing down 344 runs.

Points table after Round 7

Group A and B

The next round matches will start on 4th February. 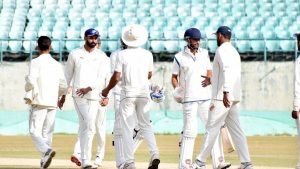 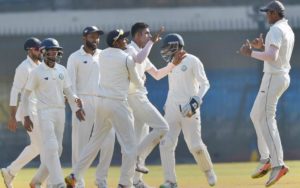 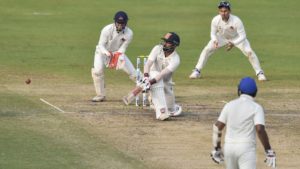 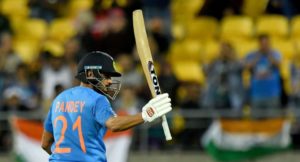