Puneri Paltan: Placed at the eleventh position in the points table, Puneri Paltan seems to have lost the path towards the playoffs. The last game they played was against Bengal Warriors where they lost after a fighting contest. The outcome of the match ended against their favor as they lost with a scorecard of 39:42. However, the positives for the side from that game was the performances of Pankaj Mohite (11 points) and Manjeet (10 Points). Skipper PO Surjeet Singh is struggling a bit, as he is unable to tackle the opponent raiders. Overall, the side looks good but they have to come up with some different game plans in order to convert in their favor.

Gujarat Fortunegiants: Having lost the last match against UP Yoddha, Gujarat Fortunegiants are lying on the eighth position in the points table. Except for the skipper Sunil Kumar, none other defenders are able to tackle the opponent raiders. In the last game against UP Yoddha, raider Sachin Tanwar (10 Points) scored a Super 10 for the team but could not bring his side towards victory. Rohit Gulia (2 Points) seemed to struggle a bit in the game as he could not capitalize on the given occasions and score points. More GB who has been a rescuer of the side on various occasions failed to score on regular intervals. Apparently, the sides’ defense needs some check and for that, they need to come up with some game-changing plans. Owing to their good record against Puneri Paltan, Gujarat Fortunegiants will be hoping to be winning the match tonight.

PUN vs GUJ Broadcast Details: The Kabaddi match between Puneri Paltan and Gujarat Fortunegiants will be telecasted across the Star Sports Network in multiple languages. Live Score updates and live stream will be available on Hotstar.

Puneri Paltan
Pankaj Mohite – The raider has been one of the most consistent players of his side as he has already scored 64 points in 11 matches. If given a go in the playing seven he can make a difference in his team’s victory.
Manjeet – The lanky raider has been a consistent performer for the side as he has scored 92 points in 14 games and has won several games for his team so far. He is been considered a key player for his side this season.

Gujarat Fortunegiants
Sachin Tanwar – One of the top raider of his side, Sachin has performed consistently for side and led the raiding department well along with his fellow raiders. He has scored 65 points in 12 matches and remains a key player of the side.
Rohit Gulia – The all-rounder has been performing well for his team as his contribution is precious in the team’s win. So far, he has 73 points in 14 matches and is one of the raiding mains of his side. 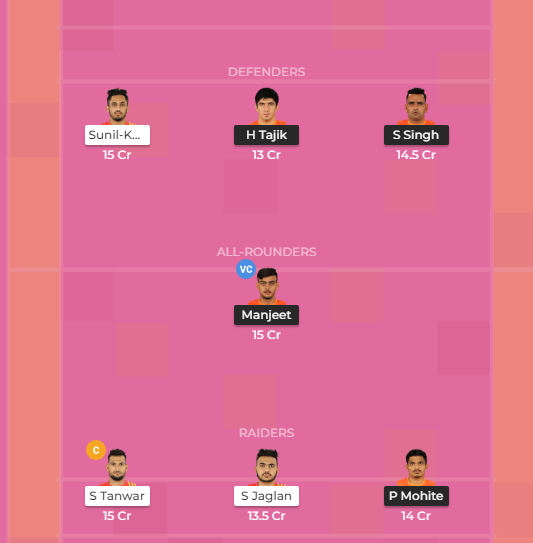 Catch all the live updates of PUN vs GUJ Kabaddi Match, including live scores and match report. This time PUN vs GUJ Dream11 Prediction will depend on the final team line-ups.